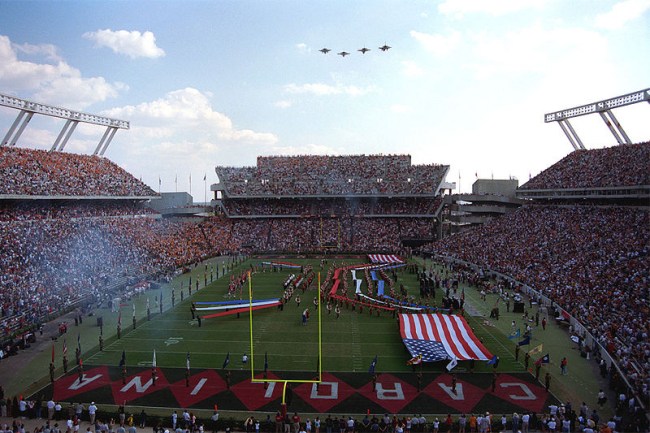 This year’s University of South Carolina football team is one game over .500, which may cause students to drink. Or maybe USC students are just drinking because they are college students, but whatever the reason they are taking their partying to another level — one that has led to “wreaking havoc” at the local hospital.

In a report from The State, USC students are getting so drunk that they have to be taken to the Palmetto Health Baptist Hospital in Columbia, South Carolina. Nurses of the health center informed the publication that the hospital’s emergency room gets overrun with USC students that can sometimes become violent.

“They try to run away, fight people and pee in the corner,” one Palmetto nurse told The State. “We do get violent USC students,” the anonymous nurse added. On St. Patrick’s day, a 23-year old USC student allegedly “bit the tar out of” one of the nurses before she was put in restraints, arrested and taken to jail. One man whose wife works at the hospital said she has been “swung at, spit on, etc” by plastered USC students. So many bodily fluids being sprayed in Columbia.

After Gamecocks football games, the hallways of the hospital are lined with inebriated students laying in stretchers. Palmetto Health spokeswoman Tammie Epps said that drunks overwhelm the facility and “places a strain on the emergency department, especially since many of these patients may not require medical treatment.”

The usual cause of hospitalization is for excessive drinking or for drug use. “Most of them are 18, 19 years old,” one nurse said. “One of them wasn’t even 18 years old.” “We get kids we have to intubate — we have to breathe for them because they drank so much or got into some drugs,” a nurse told the publication.

The hospital said the peak season for USC students visiting the hospital is in the fall months of September, October, and November, when new students find out how much they can’t handle their booze and because of tailgating before football games. “It may have something to do with the USC football mentality,” said a Richland County EMT. “If drinking were a national sport, USC would probably be number one.” The EMT added that “spitting, kicking, the whole nine yards is pretty common” when treating drunk USC students.

During a recent Gamecocks’ football game at least 15 students were treated at Palmetto Baptist, which took away resources from patients who were actually sick. The influx of shitfaced students means that more Richland County EMS ambulances are needed at Williams-Brice Stadium and fewer EMTs available for other emergencies.

There were 161 USC students who were transported to the hospital for alcohol or drug-related reasons last year, which is about five per week. However, that is the University of South Carolina’s official count and does not include all of the times that are undocumented by the college.

The University of South Carolina recently took action against the drunken shenanigans and banned hard liquor at fraternity tailgate lots before Gamecock football games. USC’s Interfraternity Council, the governing body that regulates fraternities at the university, now prohibits all alcoholic drinks with more than 15 percent alcohol at private fraternity tailgate lots. Fraternities caught violating the new rules will be hit with a $30 fine per member and a one-week suspension from the tailgate lot.

One could understand getting plastered and urinating in the corner, but what’s up with biting nurses attempting to save you from the overindulgence of liquor? Be better Gamecocks.