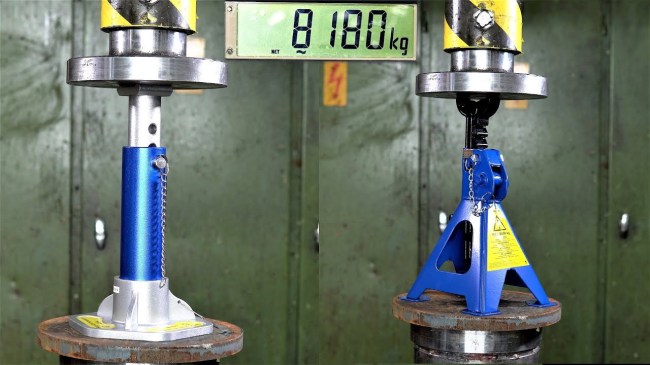 Anyone who has ever worked on a car, even just changing the oil, while lying underneath it as the vehicle sits on some jack stands knows that there is occassionally a moment when you realize that your health and well-being, and perhaps even your life, depends on those jack stands doing what they are supposed to do, which is keep the car from crushing you.

This thought becomes even more prominent when companies like Harbor Freight recall nearly 500,000 jack stands for being faulty and then replace those recalled jack stands with replacement jack stands that also failed. Whoops!

So, to see just how reliable the ratings are on various jack stands, the fine folks over at The Hydraulic Press Channel did what they do best: crush a few different types of them underneath their 150-ton hydraulic press.

So how did they fare?

Well, as one might expect, it went better for some jack stands than others. All in all though, they did pretty well.

A jack stand rated for around 4,400 pounds was able to handle about 12,300 pounds before giving way. When they added a safety pin to the same jack it survived all the way up to 18,600 pounds of force.

The next stand they tested was rated for around 6,600 pounds stayed stable up to 27,500 pounds.

Even a crappy scissor jack like you find in the boot of your car rated for 3,300 pounds lasted all the way up to 9,200 pounds.

None of this, of course, guarantees anything as we saw with Harbor Freight, but hey, if nothing else, the sheer joy these folks get from crushing stuff under their hydraulic press will give you life.