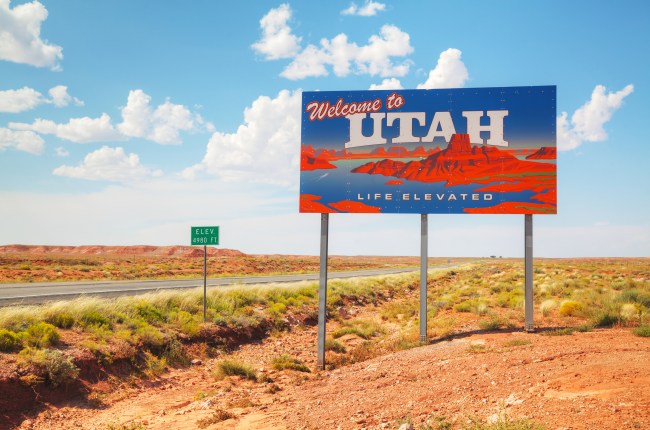 Utah is one of the least progressive places in America. I visited Zion National Park in Utah back in November for work and they only just passed a law allowing regular strength beer to be sold (5% ABV) which was actually pretty incredible because I’d expected to be drinking bottled water after every hike but they’ve already got some bonafide excellent craft beers available there. But I digress.

The state of Utah is quite socially conservative. 73% of the state are Christians and 55% of those Christians are Mormon, the highest percentage of any state in the country. So when I saw this safe sex/condom campaign coming out of Utah I didn’t think there was any shot in hell that it could be real.

I didn’t think these brilliant dong covers that were designed as part of a campaign to combat the spread of HIV could actually be a real state-sponsored initiative because they are too good. I’d be shocked to see these in any state let alone Utah. The innuendo is fan-fucking-tastic. And if these slogans don’t make their way to t-shirts that are sold forever it will be a crying shame. Truly.

Check these out and tell me these condom slogans printed on bumper stickers and t-shirts wouldn’t make the best ‘Visit Utah’ tourism campaign in the history of America. We could put these designs on t-shirts here at BroBible and I’d be able to retire by the end of 2020 they’d be so successful. They’re that good.

Themed condoms from the Utah department of health to help fight HIV. These are great 😂 pic.twitter.com/dDBlrfRVgR

NEW:
Utah Health Department confirms the condom campaign was $353,000 in an CDC grant.
Just shy of 130,000 condoms were ordered.
42,000 were distributed as of yesterday that are trying to be reclaimed.
.@KUTV2News pic.twitter.com/aMwzVi0RkA

Did these Utah comedy condoms get a bad "wrap" when Governor Herbert vetoed them for "sexual innuendo"? The story at 4 on @abc4news pic.twitter.com/QIgUmVbXck

I understand that the Salt Lake, Utah (SL,UT) one might be confusing and offensive to some people who don’t immediately realize it’s referring to the Great Salt Lake but there’s no sense in getting riled up over the others. Governor Herbert of Utah has ripped them from shelves and asked their partners to stop distributing them.

The Utah Department of Health apologizes for the offensive packaging included on condoms distributed as part of an HIV campaign. The designs did not go through necessary approval channels and we have asked our partners to stop distributing them immediately. 1/2 pic.twitter.com/jC9l4Fs0oh

According to FOX 13 Now, the state was planning on distributing 100,000 of these glorious jock socks until Governor Gary Herbert ruined the fun.

“The Governor understands the importance of the Utah Department of Health conducting a campaign to educate Utahns about HIV prevention,” his spokeswoman, Anna Lehnardt, told FOX 13 in a statement. “He does not, however, approve the use of sexual innuendo as part of a taxpayer-funded campaign, and our office has asked the department to rework the campaign’s branding.”

The condoms had wrappers that touted the “Greatest Sex on Earth” (a parody of Utah’s “Greatest Snow on Earth”); “This is the Place” (which was uttered by Brigham Young when pioneers entered the Salt Lake Valley); the subversive “SL, UT” for Salt Lake, Utah; “Toss the Jello Salad;” and, of course, the local landmarks “Fillmore, Beaver.”

Disappointed but not surprised. I think everyone in the nation would’ve been shocked to learn a few months from now that these condoms had been widespread across Utah. It’s just not the type of state that’s ready to welcome public jokes about sex and that’s a shame because these designs deserve to be placed in a museum.

The Utah state government has launched a new website, HIVandMe.com, as part of this campaign. That website will remain along with “H is for Human” billboards. So they didn’t ripcord the entire campaign, just the fun parts.