The crew at Victory Brewing has been pumping out some phenomenal beers since a couple of childhood buddies opened up a tiny operation in Pennsylvania in 1996 before taking the craft beer world by storm.

It’s hard to go wrong with any of the offerings in Victory’s lineup, but I’ve always been partial to Golden Monkey since getting a taste of the brewery’s take on a Belgian tripel for the first time during a late-night beer run about a decade ago (the fact that it boasts a 9.5% ABV certainly doesn’t hurt).

In 2015, Victory hopped aboard the sour bandwagon when it unveiled the equally delicious (and perfectly tangy) Sour Monkey. Now, it’s decided to take things one step further by turning the franchise into a trilogy with the debut of Berry Monkey, which is slated to debut in its taproom next week before hitting shelves everywhere Victory is sold in mid-February. 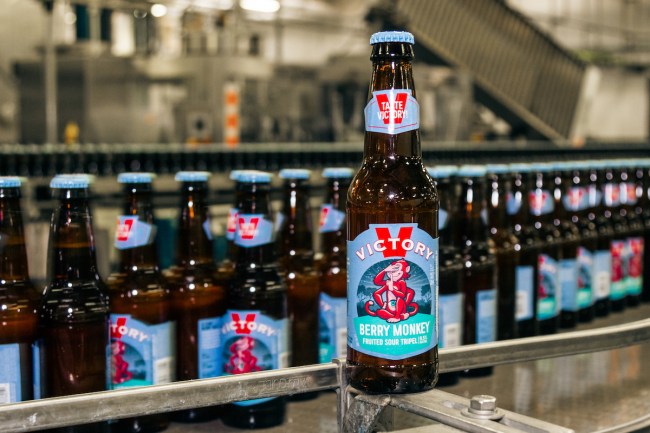 As you can probably guess from the name, Berry Monkey is a fruited twist on Sour Monkey that features the addition of the raspberries used in the brewing process to impart a bit of sweetness the balance out the tartness of its pucker-inducing counterpart (as is the case with every beer in the Monkey line, it also clocks in at 9.5%).

While Berry Monkey is officially marketed as a “fruited sour tripel,” if you’re looking for a lambic with a bit more of a kick than the usual offerings, this will be right up your alley.