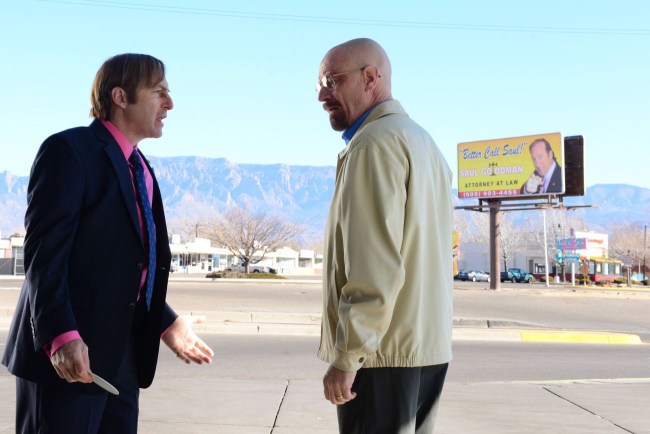 Ever since premiering back in 2015, Better Call Saul has achieved such levels of success that its now able to stand on its own merit, desperate from the previous triumphs of its predecessor Breaking Bad.

Yes, while Better Call Saul is obviously connected to Breaking Bad, the former has never used the latter as a crush, instead choosing to build its prestige and reputation on its own. Still, while the one is able to thrive without the other, that doesn’t mean fans aren’t dying to see further overlap between the two, particularly when it comes to the two characters that started it all: Walter White and Jesse Pinkman.

Five seasons into Better Call Saul and New Mexico’s pre-eminent meth-cooking duo has yet to make an appearance. And with just one season left, it’s truly now or never for a Dynamic Duo cameo. But will it happen? Showrunner Peter Gould recently provided some insight to Collider.

“I like to think that we don’t have as much of an obligation to have Walt and Jesse back in Better Call Saul because they’re such a great appearance in El Camino. But having said that, I would love to have them back. I’d love to have Bryan direct an episode. I got to write an episode [of Breaking Bad] that Bryan directed and I was on set with him every day, and it was a wonderful experience. He’s a magnificent director. He’s one of the few directors who has a facility for the lightest comedy and the darkest drama. He’s remarkable. And Aaron Paul is possibly the happiest human being I’ve ever met, and he makes everybody around him happy. So yeah, I would love to have them back.” [via Collider]

If I was a betting man (which I certainly am), I’d be putting my money down on Walt and Jesse eventually making an appearance — there’s simply no way Better Call Saul could exist for six seasons and not, at least once, give fans a taste of the two most famous characters in Vince Gilligan’s New Mexican drug cartel universe.

Better Call Saul, which wrapped up its penultimate season just prior to the end of the world, will return for its sixth and final season sometime in 2022. The series will run for 63 total episodes, which is exactly one more episode than Breaking Bad.

RELATED: The Best Episode Of ‘Better Call Saul’ Was Actually Cooked Up While Filming ‘Breaking Bad’