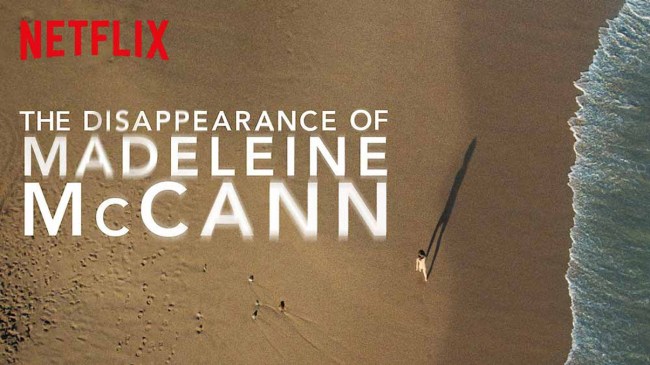 Having viewed almost 100 documentaries over the past 12 months I have taken it upon myself to take that knowledge and offer up some recommendations. And even if you don’t like the doc I am reviewing this week, I always include a few more at the bottom. Out of all of those I promise there will be at least one that you will love.

Previous recommendations we’ve shared include the long-unsolved murder of one of rap’s legendary figures, a shocking tale of weed, murder, disappearances, and outlaws, the story of the craziest, and deadliest auto race in the world, and a true crime documentary adapted from best-selling author John Grisham’s only nonfiction book.

This week we’re taking a look at another fascinating documentary called The Disappearance of Madeleine McCann, available on Netflix.

If you own a TV or have spent more than a minute on the internet, there is a better than average chance you have heard or read the name Madeleine McCann at least once.

Because the disappearance of Madeleine McCann is more than likely the world’s most famous, most covered missing child case since Lindbergh’s baby went missing in 1932.

On May 3, 2007, 3-year-old Madeleine McCann was on vacation with her family at a resort in Praia Da Luz, Portugal. That night, her parents Kate and Gerry McCann left her sleeping, alone in their rental with her even younger twin siblings, as they ate dinner about 180 feet away at an open air restaurant with friends. This despite a babysitting service being available at the resort.

Kate, Gerry and their group of friends reportedly took turns checking on the children every half-hour or so until at 10 p.m. Kate McCann discovered that her daughter Madeleine was not in her bed and the window was open.

12 years and many millions of dollars later, Madeleine is still missing.

Netflix’s new documentary series The Disappearance of Madeleine McCann is causing controversy similar to the issues that faced the investigation it covers. It probes numerous consipracy theories, most notably the theory that Madeleine’s parents had something to do with her disappearance, be it on purpose or by accident.

Considering how often Kate and Gerry McCann have put themselves in front of a camera over the past 12 years, their refusal to take part in the Netflix documentary because they didn’t want to fuel conspiracy theories and potentially “hinder” the ongoing investigation can certainly be viewed as rather ironic, if not suspicious.

“We are aware that Netflix are planning to screen a documentary in March 2019 about Madeleine’s disappearance. The production company told us that they were making the documentary and asked us to participate. We did not see and still do not see how this programme will help the search for Madeleine and, particularly given there is an active police investigation, could potentially hinder it.

Consequently, our views and preferences are not reflected in the programme. We will not be making any further statements or giving interviews regarding this programme.”

Overall, the documentary, especially for those not terribly familiar with Madeleine McCann’s disappearance, is a fascinating look at how the media gets carried away, how social media dramatically affects people’s opinions, and asks the question, “Why was this one particular case of a missing child deemed by the media to be so much more important than the thousands of others that happen every year?”

Unfortunately, and frustratingly, there isn’t a clear-cut answer to that question, nor are there many others with regard to this ongoing tabloid-fueled mystery.

That doesn’t mean it isn’t worth a watch, however. The many questions the documentary raises are what makes this mystery so compelling in the first place.

Stop at Nothing: The Lance Armstrong Story Netflix

Perfect Bid: The Contestant Who Knew Too Much Amazon Prime Video