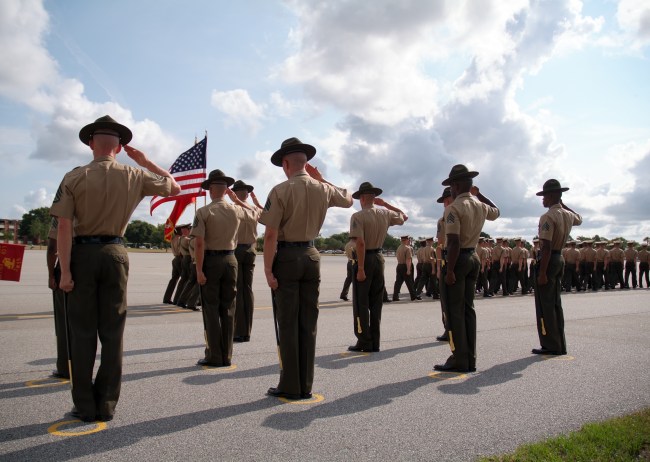 Virtually every aspect of life has changed over the past month or so. There’s no end in sight to our new way of life. The world is adapting each day and we’re constantly finding ways to maintain some semblance of normality.

These adaptations span everything from learning to cook, date online without ever meeting a person face to face, ‘go to school’ at a computer, do our jobs from home if we can, and rub one out in the bathroom because the extended family decided to move in until the storm blows over. You know what I’m talking about. Personal space is a thing of the past.

The United States of America has the greatest military force in the history of civilization. This is a fact. And the USA won’t let a little global crisis get in the way of training new recruits.

Business Insider caught up with Capt. Bryan McDonnell, the Director of Communication Strategy & Operations at the Marine Corps Recruit Depot Parris Island to discuss the ways they have been forced to adapt Boot Camp in lieu of the new 6-foot rule and other personal space restrictions. They put together this interesting clip which shows the ways Boot Camp has already changed in just the past few weeks:

Here’s the description of that video to add some context:

The COVID-19 crisis is changing the way future United States Marines are trained at the Marine Corps Recruit Depot in Parris Island, SC. According to anonymous defense officials who spoke to the Washington Post, between 20 to 50 positive cases have been confirmed at the Depot

According to a Recruit Depot spokesperson, some of the cases were discovered in the recruit population. Beginning March 30, the Recruit Depot suspended the shipping of new recruits to Parris Island. When shipping resumes, new recruits will be held in a 14-day “staging” period before they begin processing ahead of training. These recruits will be medically screened multiple times per day. Due to the crisis, physical distancing measures are being implemented in dining facilities and “squad bays” where recruits sleep

What a completely fucking wild time in history for these recruits to be moving into close quarters with complete strangers. The 14-day ‘staging’ period is probably pretty effective at weeding out any sick recruits but 14 days isn’t a sure thing with this virus, nor does it mean the virus can’t make its way into Parris Island in other ways.

Given how much the world has changed in a month I can’t even begin to wrap my mind around where we’ll be two months from now.