What The Holy Hell Is A French 75 And Why Is Indiana In Love With It? 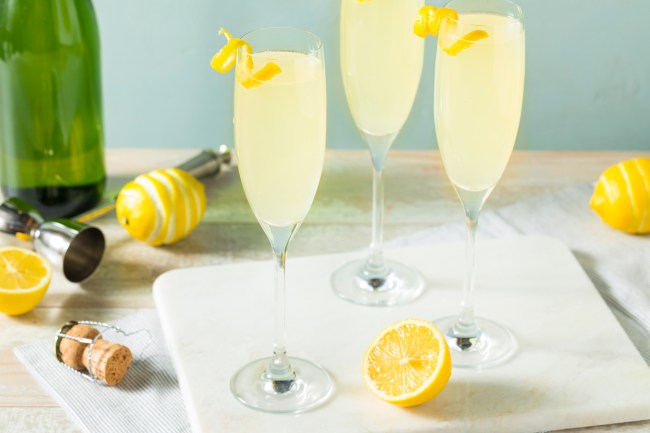 I imagine those who clicked the link to this column saw the term “French 75” and half expected to find some pointers on a new sexual maneuverer, perhaps one reminiscent of an Alabama Hot Pocket combined with the show-stopping flare of the Dirty Sanchez. Only maybe, just maybe, they were hoping that this new kink might have a bit more style and class, as to prevent them from getting the ever-living shit slapped out of them by their old lady if they dared pulled any weird amphibian-style jackery in the boudoir. Well, I hate to disappoint you, fellas, but nothing about this piece is going to put you at risk of a savage beat down at the hands of your better half. No, strangely enough, this literary offering is more about getting to the bottom of precisely what the holy hell a French 75 really is and why everyone in my home state of Indiana is Googling it.

Giving a nod to National Cocktail Day (that’s March 24 just in case you bastards needed another reason to get liquored up), Google recently published a report revealing the most searched cocktails by state. As you might imagine, some of the findings were not at all surprising. For example, Alaska likes their Whiskey Sours, presumably to keep from freezing their nuts off during those harsh winters. Meanwhile, Delaware’s Punkin Chunkers are partial to the Screwdriver and Florida’s dense mulatto population is keeping it real with its appreciation for the Cuba Libre.

But Indiana, well, let’s just say that in this place where things like basketball, big trucks and hunting are often the fashion of the day, the average drinker seems to be getting a little bit more boujee. As a betting man, I would have wagered what is left of my eternal soul and my vintage collection of godemiches that Hoosiers were only scouring the internet for backwoods cocktails consisting of Busch Light. I mean, Hoosier boozehounds have always been really serious about this brew. They don’t care about flavor and they’re not falling for any of that hipster propaganda about craft beers being better and stronger. All these hillbillies want is a brew they can drink from morning until night and still keep the John Deere between the mailboxes.

And while Iowa is often credited for being the unofficial Busch Light capital of the world, I’d venture to say that Indiana is a close second. Seriously, I once saw a beer delivery driver sitting outside of a CVS Pharmacy sobbing into his hands. I was hesitant, at first, to say anything but just couldn’t pass up an opportunity to find out what makes the beer man cry. When I asked him if he was okay, he said he was just tired from rolling thousands of Busch Light cases into stores all week. Sweet Jesus, I couldn’t believe it. The Hoosier appetite for cheap beer literally broke this dude. Now that I think about it, Iowa might want to consider putting its beer dudes on suicide watch.

After carefully reviewing Google’s latest data on cocktail searches, I was shocked to see that I was entirely off base. The results showed no signs of any creative redneck concoctions involving Busch Light. Nope. Hoosiers are now evidently getting into some swanky beverage called a French 75.

So, uhm, yeah. What the fuck is that?

I’m not even going to pretend that I’m some cocktail whispering guru that knows everything there is about the alcoholic beverages that people are enthusiastic about. Honestly, I don’t give two-flying squirts. I’m too busy worrying about shaking a hangover on any given day to pay too much attention to anyone else. But I’m also not wholly oblivious to what’s on the drinking scene. I hang out in bars and see all of the ridiculous shit people are ordering. But a French 75? Never heard of it.

At first, I thought that maybe I was just a smidge out of touch with the cool kids because of all of this lockdown business and perhaps missed the memo about how all of us rural route shit-kicking types were now supposed to be knocking back cocktails that sound like the rim job special at a brothel in Amsterdam. So, I did some research to see what I was missing out on, and sweet pickled Pete, I was horrified, to say the least, and honestly slightly embarrassed.

The French 75 is probably what you might expect. It’s a hoity-toity cocktail first concocted in the 1920s, consisting of gin, champagne, simple syrup, a splash of lemon, and served in one of those skinny ass toasting flutes. This is bizarre considering that the seemingly girly drink is named after the powerful French 75-mm field canon that you’ve undoubtedly seen unloading death and destruction if you’ve watched any World War II documentaries on the History channel. It’s not, however, exactly one of those beverages that can be consumed by Mr. Every Man. I feel like it’s something the Great Gatsby might have handed every girl he was trying to bang.

But the beverage has a rich history. In fact, it was the prestigious mob-operated Stork Club in Manhattan — where everyone from J.D. Salinger to the Kennedys went to get hammered — that made this foo-foo-cocktail so popular back in the 1940s. And if you’re into old movies, you can see people drinking French 75s in films from the 40s and 50s, like the Humphrey Bogart classic Casablanca and a couple from John Wayne. There’s even a newer British drama called Mr. Selfridge where the French 75 makes an appearance. So, without a doubt, this cocktail is a classic among high society, and it has an exciting past. Why it’s apparently making a comeback where cornfields and camouflage collide, I have no fucking clue. The world may actually be coming to an end.