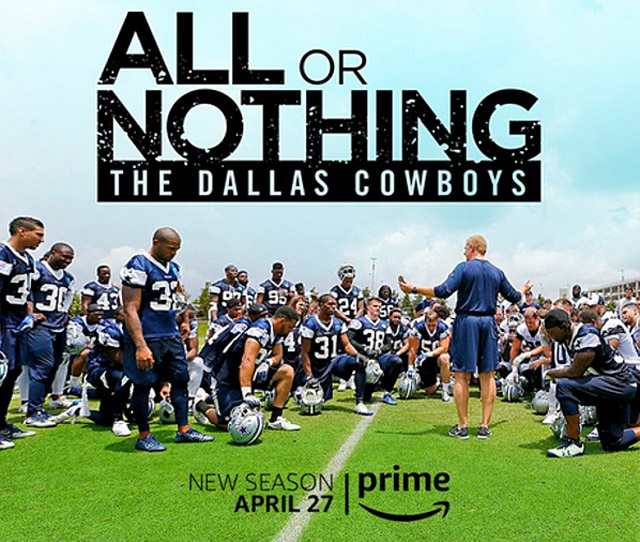 Can you feel it? We are getting so much closer to having more warm days than cold. Before you know it, April will be here, the temperatures will rise and we will be able to binge-watch a whole bunch of new TV shows and movies on Amazon Prime Video.

What? Did you think I was go to say we will be able to leave the house and do things outside? Pffft… What world are you from?

The month of April brings us several Amazon Prime Original Series exclusively available for Prime members to stream or download.

Bosch S4: The Prime Original Series is based on Michael Connelly’s best-selling novels and stars Titus Welliver and Jamie Hector. Season four chronicles the events after an attorney is murdered on the eve of his civil rights trial against the LAPD. Detective Harry Bosch is assigned to lead a task force to solve the crime before the city erupts in a riot. Bosch season four is available in UHD on compatible HDR devices. (April 13)

All or Nothing: Dallas Cowboys S3: The Emmy-nominated, Prime Original Sports Documentary Series launched by Amazon and produced by NFL films, gives viewers access to the Dallas Cowboys 2017 season and shows footage unlike any that’s been captured on screen. (April 27)

Little Big Awesome S1A: The Prime Original Kids Series follows two inseparable buddies, Gluko and Lennon, who are in for a wonderfully strange adventure. Not only must they get a lost little bubble back home to Bubble Land, they need to make it back in time to stop a group of adorable yet naughty kittens from messing up Grandma’s house. (April 27)

In addition to those Prime Video Originals, licensed TV series coming to the service next month include season five of History’s fictional drama Vikings and season two of BBC and Starz’s co-production The Missing. Additionally, popular films like the Bill Murray classic Meatballs, The Florida Project and Friday the 13th , as well as popular titles likes Spaceballs , Troy and Uptown Girls join existing films already on Prime Video.

Next month through Amazon Channels, Prime members subscribed to CBS All Access will be able to enjoy two big events live while they happen: The Masters and the 2018 Academy of Country Music Awards. On HBO, action fans can watch the season two premiere of Westworld or check out the newest mini-series Howards End on STARZ. Drama fans looking for adventure can tune into the series two premiere of The Good Karma Hospital on Acorn TV.

AVAILABLE APRIL 5
The Killing of a Sacred Deer

AVAILABLE APRIL 12
I Can Do Bad All by Myself

AVAILABLE APRIL 27
All or Nothing: Dallas Cowboys (season 3)
Little Big Awesome (season 1A)

New TV Available for Streaming on Amazon Channels in April

Live TV Available for Streaming on Amazon Channels in April