Ever Wanted A Blinged-Out Pillsbury Doughboy Necklace Owned By Whitey Bulger? We Have Some Fantastic News 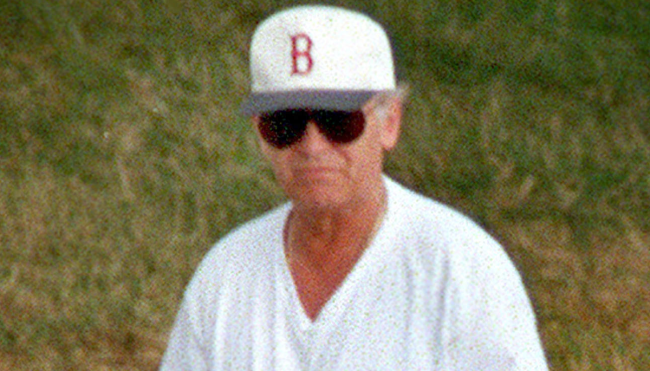 Martin Scorsese already had plenty of twists and turns to work with when he decided to adapt Infernal Affairs into what would become The Departed, but he managed to add another layer of intrigue by shockingly drawing some inspiration from the real world of organized crime by throwing the tale of Whitey Bulger into the mix.

Jack Nicholson perfectly channeled the brutally unhinged mob boss who ruled South Boston with an iron fist in the 1970s and ’80s with a little bit of help from the FBI, which was willing to turn a blind eye to Whitey Bulger‘s blood-soaked takeover of the neighborhood where he grew up in exchange for information concerning his rivals. It was a win-win agreement that allowed the organization to take down key members of the Italian mob and, in turn, made it easier for Bulger to rise to prominence.

Things eventually came crashing down when other agencies realized the FBI had played an instrumental role in the impressive number of crimes Bulger committed over the years—including murder, extortion, and smuggling guns for the IRA—and in 1994, they had compiled enough evidence to hit him with a RICO case. However, after being tipped off about his impending arrest, the infamous gangster-turned-informant went on the lam and managed to elude law enforcement officials until being tracked down in California in 2011.

Bulger was ultimately sentenced to life in prison before the fascinating saga came to a close when he was beaten to death by his fellow inmates in truly gruesome fashion in 2018. His assets were also seized by the U.S. Marshalls in the wake of his arrest before being auctioned off in 2016, but if you missed out on the opportunity to secure one of the many belongings that were offloaded, you still have a chance to get in on the action courtesy of a pawn shop in his hometown of Sommerville.

On Thursday, a Facebook user revealed he’d stumbled across a piece of jewelry that was allegedly owned by Bulger at some point in time but was understandably skeptical that it actually belonged to him—which is pretty understandable when you consider it’s hard to imagine Bulger would’ve ever rocked a diamond-encrusted Pillsbury Doughboy on a massive chain.

As the owner of Whitey Bulger’s coffee grinder, I’m sure this would really be a nice addition to my collection pic.twitter.com/mrMocYx9XM

The massive piece of bling was eventually purchased by LBC Boutique & Loan, which posted a video providing some more details about the necklace that can be yours if you have $8,500 to spare.

Sure, it might be a bit steep, but can you really put a price on one of the most absurd pieces of history you’ll ever encounter?