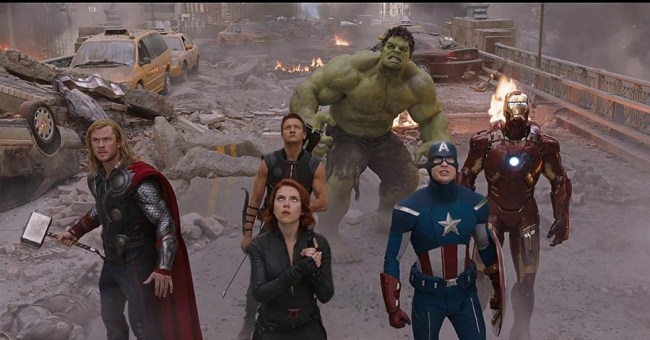 When it comes to the movie franchises that rule the box office, nothing comes close to topping the Marvel Cinematic Universe, which has grossed over $18 billion since The Big Bang happened in the form of Iron Man back in 2008.

It’s a franchise that’s had more tent poles than Ringling Bros. and each movie that gets released kicks up yet another round of nerd fervor.

I normally do what I can to keep up with the cinematic times, but in the spirit of full disclosure, the movies that make up the MCU are a gaping hole in the list of films I’ve watched over the years.

For the record, I’ve only seen four of them: the aforementioned Iron Man, Iron Man 2, Captain America: Civil War, and Guardians of the Galaxy (although there was one time I was getting an oil change and there was a bootleg copy of one of the Thor movies playing in the waiting area that had Chinese subtitles to make up for the fact that it was muted but I’m not counting that one).

While doing some cursory research for this piece, I discovered there are apparently 23 movies in the MCU. However, it’s entirely possible that by the time I’m done writing this, there will be at least one—and, considering the rate that they seem to release them, potentially several—additions to that list.

To use a reference that nerds will understand: these movies multiply like those balls of fuzz from Star Trek (a sentence I assume just triggered at least a few Trekkies to reflexively say, “Ummmm, they’re called Tribbles” out loud).

I admit my appetite for superheroism is far from insatiable. I’m good with a little flying around, some crime-fighting, and maybe even a dash of web-slinging here and there, but I don’t need it several times a year. This is precisely the reason I’ve been completely unable to catch up to the rest of the world when it comes to being excited about whatever the Avengers are fighting this time around.

I’m sure they’re decent movies but I’m not going to watch 19 of them just so I can understand the newest one. That’s not chilling out and watching a movie. That’s homework. I’m not going to start pinning pictures to the wall and connecting them with string like I’m trying to catch the Zodiac Killer just to understand why Iron Man and Captain America are beefing with each other.

For the sake of argument (and because I’m bad at math), let’s say the average length of a Marvel film is two hours. That’s 46 total hours of Marvel.  Yes, I’ve already knocked out about eight of those but that still leaves another 38 that I need to devote just to be up to speed.

That’s a simply unreasonable amount of time you have to devote to figuring out which superheroes are friends with each other and which have ongoing feuds and all of the other various plot points you need to know to make sense of what the hell is going on.

In light of what’s currently going down, I (like most people) have copious amounts of free time on my hands. When you throw my subscription to Disney+ into the mix, it seems like this would be the perfect opportunity to binge all of that Marvel goodness.

Still, after spending more than six weeks stuck at home, I’ve watched exactly zero Marvel movies, opting instead for episodes of The Simpsons I’ve seen a thousand times and even diving into The Outer Limits, a kickass sci-fi cousin of The Twilight Zone that aired in the 1960s.

My decision to not throw on a Marvel flick isn’t a conscious one, but even with ample time to watch the entire slate of movies several times over, I really haven’t been tempted to check out the various misadventures of Avengers and Co.

At this point, I’ve come to terms with the fact that I simply don’t care about catching up on the MCU. In all honesty, it’s a liberating feeling knowing that I don’t have the crushing weight of nearly two dozen movies to catch up on (even though the joke is ultimately on me for missing out on one of the biggest pieces of the modern pop culture puzzle).

Normally, missing out on something popular means that you find yourself completely out of the loop. Imagine having not watched Tiger King and then trying to figure out who Carole Baskin is and wondering why everyone keeps accusing her of killing her husband and feeding him to tigers. You’d be totally lost.

However, Marvel is such a huge part of pop culture that I can get away with faking it and can understand most of the references and memes that have their origins in the movies as they’ve become engrained in everyday life.

I know that bad things happen to our heroes when Thanos snaps his fingers with that shiny glove and that they don’t all go out for ice cream like a victorious Little League team after their epic showdown. I know who Hawkeye is and that being really good at archery somehow counts as a superpower. I know that Thor’s brother is kind of a dick.

What I’m getting at is that I know enough about Marvel’s fictional world to get by in the real world. Plus, It’s nice to not get caught in the crossfire of the Marvel-related arguments that regularly rage on the internet.

My complete lack of interest in the MCU is not an attack on those people who stand in line for hours to get a good seat for the midnight showing of Ant-Man Goes To Summer Camp. Far from it. It’s instead Switzerland-style neutrality to keep me from getting caught between the two warring factions that are proud, card-carrying nerds of the Marvel Fan Boy realm and the Martin Scorceses of the world.

Like what you like. If you thought that Avengers: Endgame was a greater cinematic achievement than The Irishman, that’s awesome. If you think that Marvel Studios is dishing out offerings with the quality of a B-Movie that costs hundreds of million dollars and that low-budget, indie films are the only things that count as “real cinema,” that’s cool too.

All I’m asking is that you leave me out of it.