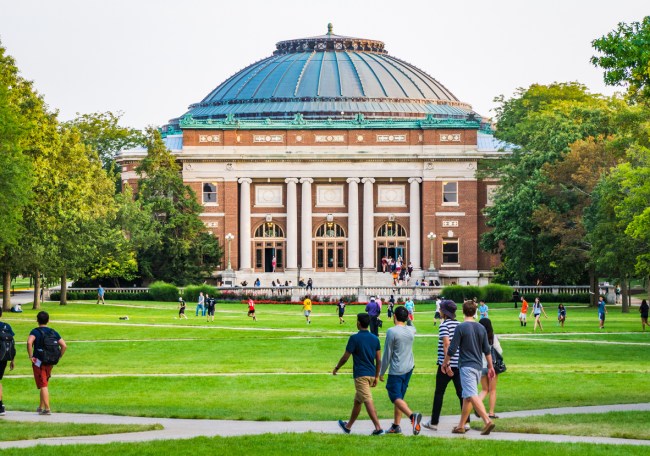 Over the past week, the concerningly rapid spread of COVID-19 has resulted in basically everything being canceled, and with officials around the world doing everything in their power to minimize the spread of the disease, some fairly extreme policies have been instituted to discourage groups of people coming into close proximity to each other.

As a result, it’s only natural that colleges have been quick to react when their general model involves packing hundreds of people into lecture halls and having many students reside in cramped quarters in dormitories while subsisting on food from buffets in dining halls similar to the ones multiple casinos in Las Vegas recently closed down.

As of this writing, around 90 colleges and universities in the United States have taken a number of different approaches to protect their students, with many schools instructing them to vacate dorms and canceling in-person classes and pivoting to ones online for the remainder of the second semester.

While these actions certainly have good intentions, there’s also been a huge fallout because of them and presented a number of logistical issues and unintended consequences that could arguably do more harm than good.

One of the most notable issues is students who are currently scrambling to make travel accommodations—especially those from other countries who are unable to return to them because of the many flight restrictions that have been instituted. While I’m certainly not an epidemiologist, I think there could also be some concern that coronavirus cases could increase due to the thousands upon thousands of students who are being forced to book plane tickets to get back home.

Additionally, if the pandemic doesn’t die down within the next few months, graduating seniors will likely be deprived of the opportunity to walk across the stage to receive their diploma and instead get it mailed to them like they went to the University of Phoenix.

However, there’s one major issue that I think is going extremely overlooked: students who live in off-campus housing, who now have more time than ever to take part in various extracurricular activities now that they don’t have to make the trek to campus.

As a former college student who had a tendency to prioritize partying over my studies, I’m intimately familiar with what an average weekend gathering looks like, and if my experience is anything to go on, coronavirus could not be more amped for what’s about to happen.

After all, what’s a better breeding ground for a contagious illness than a house or dark basement filled to maximum capacity where people drink from a communal punch bowl, chug from handles of vodka being passed around the party, and play beer pong with Solo cups that god knows how many other participants have put their lips on (not to mention the people whose lips will touch each other during drunken makeout sessions)?

On the bright side, philosophy professors will be able to use this current situation as a way to remotely explain Jeremy Bentham and John Stuart Mill’s utilitarian mindset but I guess only time will tell if these closures will indeed bring the most good to the most people.