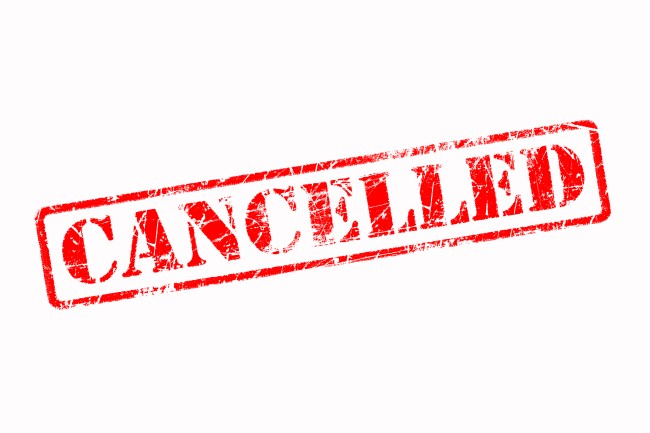 There, I just saved you a ton of time clicking around the internet. Everything is cancelled! Basketball, Hollywood, Traveling, you fucking name it — cancelled, cancelled, cancelled. Cancelled as shit. Unholy levels of cancel. Cancel-Rex. Cancelpocalypse. Lord of the Cancel: Return of the Cancelling. “I Can’t Believe It’s Not Cancel!”. Name’s Bond…. Cancel Bond. All work and no Cancel makes Jack a dull boy.

Not picking up your dog’s shit? Cancelled.

People who share their Peloton workouts on social media? Cancelled.

Trusting a fart? As cancelled as the day is long.

Escaping from your kids because of the sweet reprieve that is a school day? Cancelled.

Having to wait to play Call of Duty because it needs to download an update? Cancelled.

The episodes of The Office without Michael Scott? CANCELLED.

Not wiping down the equipment at the gym? Cancelled.

Dad’s who come out of the bathroom at the restaurant as they dry their hands on their jeans and say “ready to rock and roll?” ? Cancelled.

Commuting to work on an overcrowded apparatus of public transportation? Cancelled.

White Claws? While we’re at it… also cancelled!

The Bachelor? Please, for the love of god and for the sake of our collective societal intelligence, somebody please cancel that shit.

Cancelling? Well, we’ve got ourselves some good old fashioned cancelception here, because cancelling has now also been… CANCELLED.

Unfortunately, though, according to co-worker Matt, as a result of this blog, I, too, am CANCELLED. RIP me, I’ve been cancelled into the ether, Thanos-dust style.