Did You Know Grapes Burst Into Flames, Spit Plasma If Cooked In The Microwave? Here’s Why 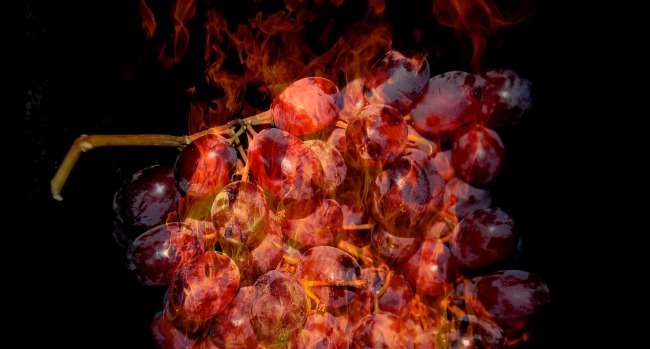 As many of you are aware, if you stick two grapes in the microwave side by side and cook them, you will literally set those grapes on fire. The grapes will even spark and create what is known as plasma.

Yes, it’s quite the party trick. Especially for those of you learning about this for the first time.

Here’s how you do it…

But WHY do grapes catch fire and spit plasma when cooked in a microwave?

Until a research article was published in the journal Proceedings of the National Academy of Sciences in 2019, scientists weren’t exactly sure.

Through a combination of videography, FEM simulations, IR thermal imaging, and thermal-paper sectioning, we have shown that the popular-science phenomenon of forming plasma with grapes in a household microwave oven is explained by MDR behavior. Grapes act as spheres of water, which, due to their large index of refraction and small absorptivity, form leaky resonators at 2.4 GHz. Mie resonances in isolated spheres coherently add when brought together such that the aqueous dimer displays an intense hotspot at the point of contact that is sufficient to field-ionize available sodium and potassium ions, igniting a plasma. This hotspot is shown to be spatially confined on subwavelength scales that approach λ0/100.

Because water has a larger index of refraction, at 2.4 GHz, than any known dielectric at visible frequencies, it is possible to explore unique resonance geometries in the microwave regime that are currently inaccessible at visible wavelengths. Thus, this work is likely to open experimental opportunities for modeling nanophotonic resonance phenomena with scaled-up objects illuminated at microwave frequencies. More direct applications may include the design of passive omnidirectional wireless antennas, superresolution microwave excitation and imaging, and the invention of microwave-pumped dielectric spaser analogues.

Right… I didn’t really understand any of that either.

I think we’re going to need a translation. Take it away, Wired.

The appliance pushes microwaves into the two grape halves, where the waves bounce around and add constructively to focus the energy to a spot on the skin. Both grape halves happen to focus the energy to the same tiny point. That intense energy jostles the atoms and molecules at that spot, heating them up so much that they can no longer hold onto their electrons, which turns them into a plasma — and boom, fireball.

They also discovered that the grapes don’t have to be cut in half to get the same results and in fact they don’t even have to be grapes, they can be gooseberries, large blackberries, or even quail eggs. “Anything grape-sized will work, if it’s watery enough,” said physicist Hamza Khattak.

The next thing the researchers said they would be tackling with regard to this phenomenon is finding out why the two grapes placed side by side repeatedly bump back and forth into each other when heated up in a microwave.

In the meantime, watch below as thermal cameras reveal the energy being generated between the two grapes, creating an increasingly powerful electromagnetic field and charging nearby electrolytes, resulting in a small plasma explosion. Oh, and be sure to show your friends what you just learned. As we’ve known for years, it’s great at parties.