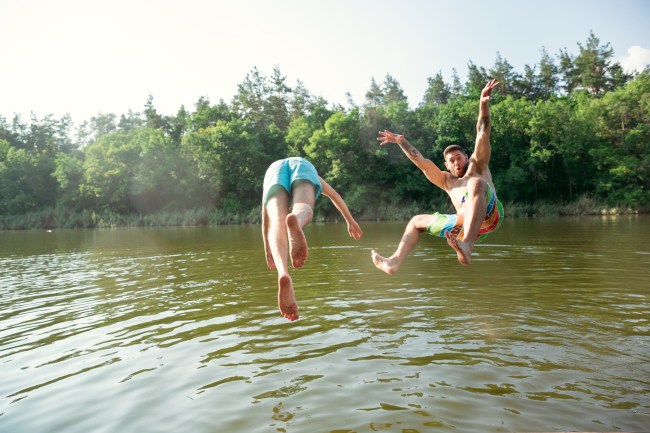 “But whatever is in the seas and in the rivers that does not have fins and scales among all the teeming life of the water, and among all the living creatures that are in the water, they are detestable things to you.” – Leviticus 11:10

It won’t be long before the Summer heat starts to drive everyone absolutely crazy, sending them on a feverish mission to sniff out the nearest body of water to jump into for a cool down. Most civilized people have enough sense rattling around in their idiot brains to do this sort of thing in a public or private swimming pool, where the water is clear and there are no bizarre, wiry beasts lingering in the depths. Plenty of other folks, however, presumably those who stand on the dark side of imbecilic, have no qualms whatsoever about taking the plunge into lakes and rivers.

But what these dipshits don’t understand is there are all sorts of vile creatures living in those waters. Some of them might clamp down and bite your wiener off mid-stroke, and others will sneak up on a man and cripple his ass with a little hydro helter skelter. The next thing you know, you’re in the local hospital strapped to life support and the look in everyone’s eyes says one thing and one thing alone: “Boy, you shouldn’t have been splashing around in that filthy water.”

Don’t get me wrong, fellas, I enjoy being on the lake just as much as the next guy. I’ll probably be there this weekend. But it will be on a pontoon boat completely stocked with beer, plenty of insect repellent, sunscreen and maybe those gift cards to Red Lobster that my mom got me for Christmas. Hey, say what you will. But there’s nothing more satisfying than chowing down at a subpar seafood chain after a long day of being under the sun. Go ahead and order me up a Lobsterita and, while you’re at it, make sure there’s plenty of those damn cheddar biscuits to go around.

Now, where were we? Ah yes, the lake. There is no denying that I enjoy spending time there, but there’s no way I’m swimming in it. No sir, the only way those new flamingo swim trunks of mine are going to get wet is if I spill beer in my lap or piss on myself trying to dangle my dong over the edge of the boat. That happens. After all, there aren’t any bathrooms on the lake. You just have to let it rip wherever you can. Still, the reason I’m not keen on swimming there doesn’t have much to do with floating around in everyone’s urine. It’s more about the madness that lies beneath.

What really scares me is the possibility of a snapping turtle gnawing off my pecker or that a water moccasin or some other slithering spawn of Satan is going to fang me into paralysis. I think about it constantly. And every time I’ve conquered these fears for a second and taken my chances in the water, there’s always been something that comes up and touches my feet, sending me into a terror trip unlike any you’ve ever seen. Sure, it might only be a catfish, but in my mind, it could also be a 900-plus-pound dick-eating sea monster, seconds away from making me its next meal. Uh-uh-fucking-uh, no, thank you. I’m perfectly content just chilling on the boat, listening to some tunes and drinking all the beer. There’s no need to risk becoming a Eunuch.

One of my boating buddies, however, thinks these fears of mine borderline on the insane. He keeps telling me that snakes and snapping turtles don’t hang out that far away from the shore, so there’s really not much of a threat of encountering anything other than fish. I want to believe him. I really do. Hell, he might even be right. Only he’s not. Not by a long shot. What that bastard doesn’t consider is all of the gnarly microscopic organisms that live in lakes and rivers that are far more frightening than any wiener nibbling turtle or hell snake. According to the Centers for Disease Control and Prevention, lakes are bacteria-ridden pools of death and destruction.

Come to find out, people who swim in lakes could catch something known as Recreational Water Illnesses (RWIs). A few types of lake-borne bacteria can cause them, one of which is a brain-eating amoeba. No, that’s not some fictionalized critter from the latest Netflix horror series. These little fuckers are all too real. They can infect a person by crawling up their nose and setting up shop in the brain where they will chomp away at it like they’re stoned at an all-you-can-eat buffet. It’s the kind of thing where a guy might feel okay for a day or two and then Boom! He’s got a savage headache, a fever, a stiff neck, he’s puking his guts up, and within five days he’s sprawled out naked on a slab at the local morgue, deader than shit. I mean, what the heck?

Now, it is important to point out that this particular brain infection IS considered rare. There’s only between zero and eight cases reported every year, most of which come from the southern parts of the United States. But come on. You don’t hear about too many people getting their dicks bit off by snapping turtles either, but I’m still not taking any chances. If a water bug can devour my brain like a plate of spaghetti, I’m out – and for good, too! I’m not messing around in lakes.

And neither should you!

Because it’s also possible to get jacked up by lake-borne bacteria like Cryptosporidium, Giardia, Shigella, norovirus and E. coli. Yep, the shit disease. These bugs can cause infections in a person’s gastrointestinal tract, respiratory system, eyes, skin and brain. There’s a variety of symptoms that can emerge when these suckers strike, but the most common is vomiting and diarrhea. That’s right, it might not be all the beer you had on the lake that’s got your body in complete disarray. It’s distinctly possible that some belligerent water bug slid into your stomach and now it’s got squatters rights.

So what can you do to avoid this from happening?

Well, stay out of lakes for starters. Health experts say if you must summon your redneck roots and jump in these bodies of water, it is best to stay away from those covered in algae or those near farms or pasture. It doesn’t matter how beautiful the scenery is out there in the country, you don’t want to be diving in the same water that the livestock use for a toilet. You’re just asking for trouble. It’s also best to avoid flopping around in lakes after a heavy rain. That’s when bacteria tends to breed.