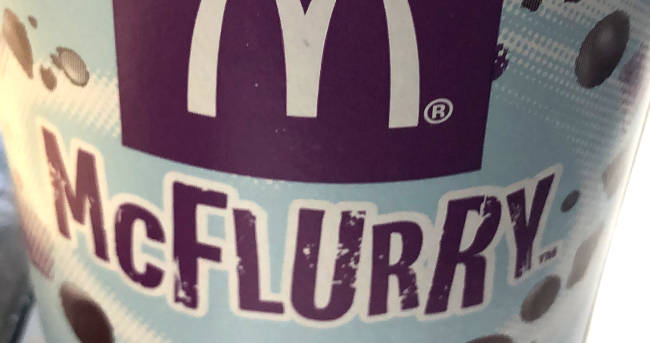 Numerous explanations have been given over the years as to why McDonald’s McFlurry machines, made by the Taylor Company, are constantly broken or not in operation.

One common reason is that the McFlurry machines have a tendency to overheat, knocking them temporarily out of commission.

Another excuse that’s often cited is that the McFlurry machines are often not working because employees are simply too lazy to clean them, so they sit idle waiting for a good scrubbing.

Now, a lawsuit, filed against Taylor by a company that has tried to remedy this delay and the high cost related to McFlurry machine repairs, Kytch, claims that Taylor illegally obtained propriety devices created to curtail the plague of broken McFlurry machines.

Taylor had a monopoly on repairs of the ice cream machines before Kytch, and—according to a lawsuit filed by Kytch—it has tried to maintain that monopoly by telling McDonald’s franchisees that using Kytch devices could cause “serious human injury.” On July 30, however, Kytch won an important legal fight against Taylor, when a California judge issued a temporary restraining order against Taylor after Kytch claimed Taylor acquired a Kytch Solution Devices in an attempt to learn its secrets.

According to the application for the temporary restraining order, Kytch believes that Taylor got a McDonald’s franchisee and member of the National Supply Leadership Council, which tests new products for McDonald’s, to acquire a Kytch device for the company, which could then mine it for “trade secret information.”

According to the court document, Taylor’s COO admits that it sought to obtain a Kytch device “in order to evaluate and assess its potential technology-related impacts upon our Soft Serve Machine—such as whether the radio frequency of the Kytch device would interfere with our software signal, or whether the Kytch device would drain the power source of our software and/or cause it malfunction,” but denied that Taylor mined it for trade secrets or even “need such information.”

On top of all that, Kytch claims that Taylor told McDonald’s and its franchisees to stop using their machines, claiming they are dangerous, and that Taylor was working on its own diagnostic system similar to what Kytch offers.

“These guys did a really effective job at frightening off all of our customers and investors so we’re hoping the public will support our case in the name of justice, right to repair and humanity,” Kytch cofounder Jeremy O’Sullivan told Vice. “We still have some diehard customers sticking with us. Though few in comparison to what we once had before McDonald’s and Taylor called our product dangerous.”

Taylor was ordered by a judge to turn over all the Kytch Solution Devices it obtained within 24 hours of the order being issued and “must not use, copy, disclose, or otherwise make available in any way information, including formula, pattern, compilation, program, device, method, technique, or process obtained by any of them.”

“It’s disgusting that such lengths were taken to steal our trade secrets, destroy our business, and to stand in the way of modernizing kitchens,” said Kytch co-founder Melissa Nelson. “Kytch is just a small piece of the broader right-to-repair movement. But our case makes clear that it’s past time to end shady business practices that create hundreds of millions of dollars of unnecessary repair fees from ‘certified’ technicians.”

Here’s to hoping that as a result of this litigation some day we will all be able to walk into our local McDonald’s, order a McFlurry, and actually receive one.