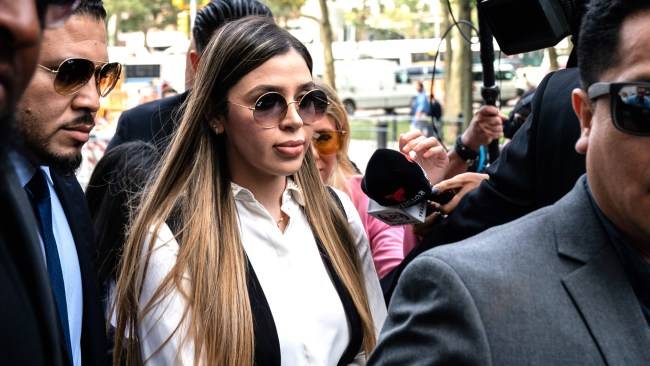 Emma Coronel Aispuro, the wife of convicted drug kingpin Joaquin “El Chapo” Guzman Loera, was arrested on charges of international drug trafficking and conspiring to assist Guzman Loera in his 2015 escape from prison.

The 31-year-old former beauty queen was taken into custody on Monday at Dulles International Airport in Virginia, according to a United States Department of Justice press release.

According to court documents, Aispuro is charged with participating in a conspiracy to distribute cocaine, methamphetamine, heroin and marijuana for importation into the U.S. Additionally, Coronel Aispuro is alleged to have conspired with others to assist Guzman in his July 11, 2015 escape from Altiplano prison, located in Almoloya de Juarez, Mexico. After Guzman was re-arrested in Mexico in January 2016, Coronel Aispuro is alleged to have engaged in planning yet another prison escape with others prior to Guzman’s extradition to the U.S. in January 2017.

Guzman Loera was convicted by a jury in the Eastern District of New York in 2019 for his role as a leader of the Sinaloa Cartel.

The Associated Press reports court papers allege that Coronel worked with El Chapo’s sons and a cooperating witness to organize the construction of the underground tunnel El Chapo used to escape from the Altiplano prison.

The plot included purchasing a piece of land near the prison, firearms and an armored truck and smuggling him a GPS watch so they could “pinpoint his exact whereabouts so as to construct the tunnel with an entry point accessible to him,” the court papers say.

Coronel, who was a beauty queen in her teens, regularly attended Guzman’s trial, even when testimony implicated her in his prison breaks. The two, separated in age by more than 30 years, have been together since at least 2007, and their twin daughters were born in 2011.

Her father, Ines Coronel Barreras, was arrested in 2013 with one of his sons and several other men in a warehouse with hundreds of pounds of marijuana across the border from Douglas, Arizona. Months earlier, the U.S. Treasury had announced financial sanctions against her father for his alleged drug trafficking.

There has been no word yet about how this latest arrest will affect Cornel Aispuro’s work on season two of the reality TV show Cartel Crew.