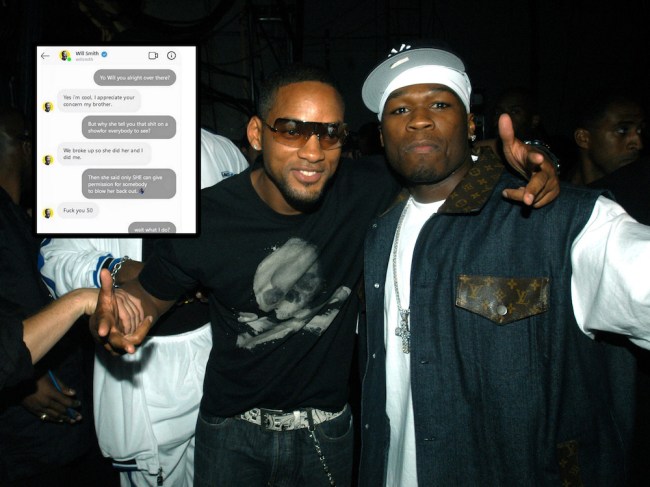 Will Smith is not having a good weekend but that’s what happens when you air out your dirty laundry for the world to watch.

After initially denying the rumor, Jada Pinkett-Smith admitted to being in a romantic relationship with singer August Alsina.

Pinkett-Smith and her husband then discussed the entire “entanglement” on “Red Table Talk” which led to Will becoming a meme. Becoming a meme is rarely ever a good thing.

The public confession left Will devastated and probably in need of some guiding voices. 50 Cent probably isn’t the voice of reason Smith was looking for at the moment and lead to an incredibly short conversation via DM.

After asking Will if he’s ok, the actor responded that he’s fine and appreciates the concern.

50 Cent then asks, “Then she said only SHE can give permission for somebody to blow her back out.”

For those unaware, “blow her back out” means pretty much what it sounds like.

50 Cent plays innocent in the comments, asking “what did I do?” after posting the conversation.

It’s safe to say the pair won’t be hanging out anytime soon, which will give 50 Cent more time to focus on abusing Ja Rule and bullying his own son.