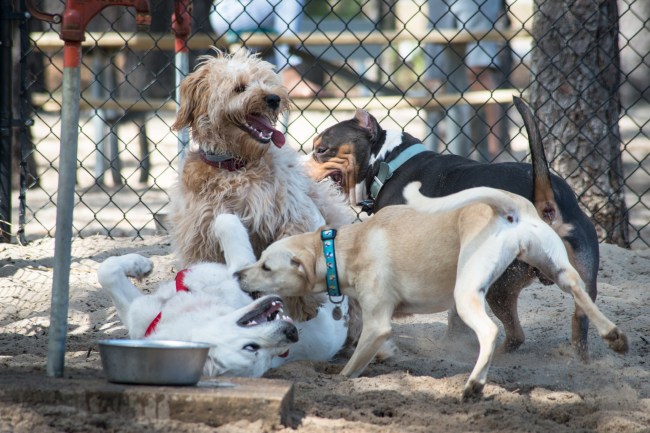 Today in: We Need A New Plague…A woman does the unthinkable and calls the cops on a dog.

Now I want you to put yourself in a mindset where you are so miserable that you believe dogs happily playing with each other mandates a police intervention. Think about how tortured your soul has to be, how sickened you have to feel to wake up every morning as you. It must be impossible to bottle up all that self-hatred, deeming it a necessity to project it on strangers and their pets.

The incident took place in Attleboro, Massachusetts between a lady being dubbed ‘Dog Park Diane’ and 42-year-old Franklin Baxley, who was filming the scene and a victim of Dog Park Diane’s lunacy. DPD called the police after Baxley’s dog allegedly ‘assaulted’ hers with an ‘aggressive’ hump. Baxley claimed he immediately pulled his dog off when the humping began, but that didn’t stop Delusional Diane from calling in reinforcements.

This crazy lady calling the cops on a DOG for “sexually assaulting her dog” when it humped her dog at the dog park today pic.twitter.com/3D0AIjgy2X

In the video, Baxley can be heard referring to Dog Park Diane as ‘BBQ Becky,’ alluding to the infamous 2018 viral video where a white woman called the police on two black men because they were barbecuing in the grill-zone of an Oakland park.

In an interview with Daily Mail, Baxley, a former lawyer, suspects the woman’s actions to be racially motivated.

‘If I were not Black, she would not have felt threatened by me talking to her and defying her orders for me to leave the park.

It was about race if you ask me, but I wouldn’t be surprised if this woman does this to just about anyone as she seems a little off.

I am a responsible dog owner, and my dog is super friendly. Anyone who goes to that park regularly knows me and will attest to that fact.

The dogs were living their best lives the whole time.’

My life would have been complete if the police showed up and threw her in cuffs based on principle. Unfortunately, we live in an imperfect world.