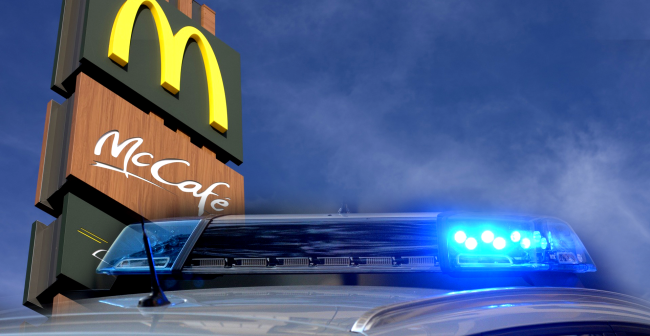 A woman was arrested in Massachusetts on Tuesday after a leading police on a wild chase that ended when she got hungry and tried to order some food at a McDonald’s drive-thru. Totally normal.

The chase occurred at approximately 8:45 a.m. local time on Tuesday in Worcester when the Worcester Police Department said it received a 911 call about a stolen restoration company pickup truck, reports ABC News.

The man who owned the pickup truck informed police officers that the vehicle had GPS and he was able to see where it was located.

As police made their way to that location the driver of another vehicle stopped them to alert them to the fact that the stolen pickup truck had hit their car only minutes before.

Armed with that information, officers were quickly able to locate the truck and its driver, 38-year-old Johanna Gardell of Worcester.

At that point, according to a statement by the Worcester Police Department, “The officer activated his blue lights, got out of his cruiser, and approached the stolen vehicle. The operator … drove away as the officer walked toward her. The officer got back into his cruiser and followed her at a low rate of speed, but she did not stop. Ms. Gardell began to increase her speed on Main St. and drove through red lights. The officer deactivated his lights and sirens and stopped following her for safety reasons.”

Gardell then crossed over into an oncoming lane of traffic, hitting a van with the stolen truck.

“At this point, two officers working a detail and another officer in the area approached the vehicle in an attempt to extract Ms. Gardell,” stated the Worcester Police Department. “She backed up the vehicle at a high rate of speed and struck a cruiser behind her, and knocked down and dragged one of the detail officers. Officers pursued the stolen vehicle at a low rate of speed before the pursuit was called off for safety reasons.”

Gardell was finally caught up to her when she pulled into a McDonald’s drive-thru and attempted to order some food, as one does.

Still not going quietly, when police spotted her at the McDonald’s drive-thru she intentionally struck one of the police cars before swerving and getting stuck in a pile of mulch on the McDonald’s property.

She reportedly fought and struggled as police tried to pull her from the stolen vehicle and was eventually subdued and arrested on a slew of charges including failure to stop for police, leaving the scene of an accident with personal injury, assault and battery by means of a dangerous weapon, malicious mischief to motor vehicle, disturbing the peace, disorderly conduct and use of motor vehicle without authority.