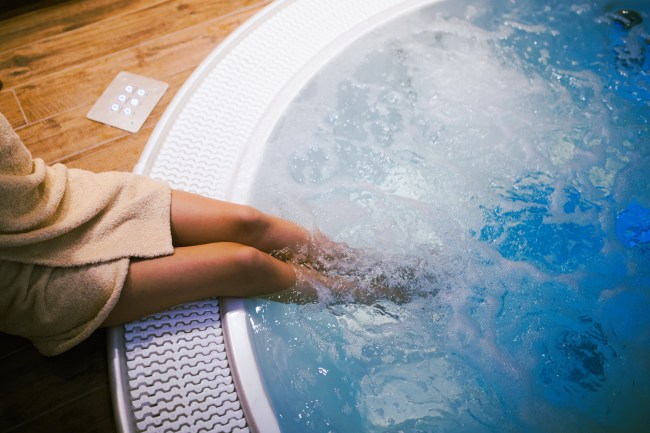 A 26-year-old woman feared she would lose her leg after a nasty infection ravaged her leg. The infection was caused by bacteria in a hot tub she was in during her vacation in Pigeon Forge, Tennessee.

An Indianapolis mother-of-two suffered a gruesome-looking infection after going in a hot tub while on vacation. Taylor Bryant starting getting a rash and blisters. She became nauseous after going in a hot tub. Her leg was swollen and the pain became so “unbearable” that it was difficult to walk a day after her first symptoms started to appear.

“Every night, Sunday, Monday, and Tuesday, we were in the hot tub and she was like, ‘That’s the only way I thought you could get this infection was from a hot tub,’” Bryant said. She said the pain was “worse than labor.”

Bryant went to a local urgent care clinic and a doctor prescribed her antibiotic medication. However, her leg’s condition only got worse. The stomach-churning infection was diagnosed as pseudomonas folliculitis or “hot tub folliculitis,” a skin infection of the hair follicles caused by a bacteria called Pseudomonas aeruginosa. The infection is generally contracted from poorly maintained hot tubs.

She was given an oral antibiotic for 10 days, but her leg deteriorated to the point she could no longer walk and was forced to use a wheelchair. The infection became so severe that doctors informed Taylor that they could not rule out amputating her infected leg that had become dark gray.

“I thought I was going to lose my leg,” Bryant said. “They told me they couldn’t make any promises and even if things went well, I might need skin grafts.”

"LUCKY TO STILL HAVE MY LEG" – An Indiana woman nearly lost her leg after she said she contracted a bacterial infection while using a hot tub on her family vacation. https://t.co/ylm8bzofex

Thankfully, her body started responding to receiving IV antibiotics for 20 hours a day for four days straight. Four months after her leg became infected, Bryant still has to wear compression socks to reduce swelling and she feels “different” sensations in her right calf.

Bryant said she did file an incident report with the hotel. “Our first family vacation!” Bryant said. “What kind of luck is this?”

“I thought I was going to lose my leg,” Bryant told WISH-TV. “They told me they couldn’t make any promises… and even if things went well, I might need skin grafts.”

RELATED: Bodybuilder Might Lose His Leg To Flesh-Eating Bacteria After Taking Bad Steroids