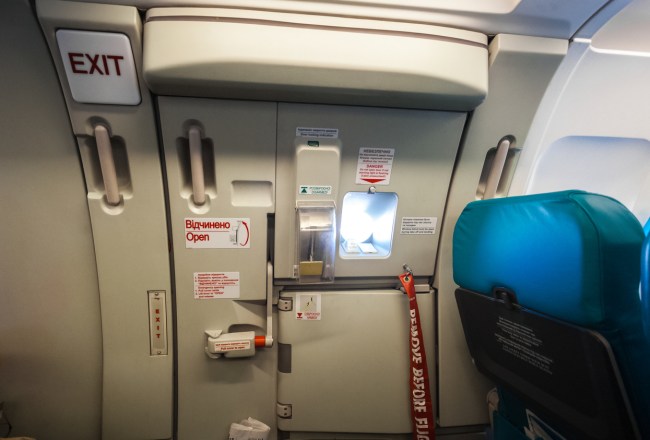 Chloe Haines caused two Royal Air Force (RAF) Typhoon jet fighters to be scrambled and escort a commercial airliner back to the airport after the 26-year-old woman attempted to storm the plane’s cockpit and open the emergency door mid-flight last June. On Wednesday, Haines was sentenced to two years in jail for her violent outburst on the Jet2 airplane.

On June 22, 2019, Haines was traveling from Stansted Airport in London, England, to Dalaman, Turkey. The then 25-year-old Haines was flying with her wheelchair-bound grandmother. Then 45 minutes into the flight, Haines erupted into an alcohol-fueled air rage fury.

According to Amy Varol, who allegedly sat two rows behind Haines, the young woman “started assaulting the two crew members, a woman and a man.” Jet2 cabin crew member Charley Coombes suffered scratches as she attempted to subdue Haines.

TWEET 1/2
So I get on a plane to turkey after being in the air for 45 mins some drunk lady (may be on drugs too) attacks the cabin crew and then tried to open the airplane door!! 6 people are holding her down, she’s screaming biting people and now she’s in a seat being held down

TWEET 1/2
So I get on a plane to turkey after being in the air for 45 mins some drunk lady (may be on drugs too) attacks the cabin crew and then tried to open the airplane door!! 6 people are holding her down, she’s screaming biting people and now she’s in a seat being held down

Haines reportedly attempted to storm the cockpit while screaming, “I’ll kill you all!”

Two RAF Typhoon jet fighters were scrambled to intercept the Jet2 commercial airliner, and caused a sonic boom in an attempt to get to the aircraft as quickly as possible. The jet fighters escorted the Jet2 airplane to the Stansted Airport, and Haines was arrested.

A woman who tried to open a plane door whilst intoxicated has been jailed for two years.

Chloe Haines tried to open the emergency exit doors on a flight to Dalaman last June, forcing it to land at #Stansted Airport.

On Wednesday, Chloe Haines appeared in Chelmsford Crown Court to be sentenced. Haines had previously pleaded guilty to endangering the safety of a passenger plane and assault by beating. Haines admitted that she had been mixing alcohol with medication, causing her to “black out and didn’t really remember what happened.”

Judge Charles Gratwicke told Haines: “Those that are trapped in the confined space of the aircraft will inevitably be distressed, frightened and petrified by the actions of those who in a drunken state endanger their lives. For some, it will be their worst nightmare come true.”

Oliver Saxby QC, who is Haines’ lawyer, said Chloe is “a troubled young person with a number of serious issues.” “She wasn’t just drunk, she was unwell,” Saxby continued. He added that Haines had not drunk alcohol since the fiasco on June 22, 2019. Saxby said Haines is “ashamed” for her actions.

Judge Gratwicke sentenced Haines to two years in jail. Jet2 claimed that the flight, which had 206 people on board, cost them £86,000, about $111,000. Jet2 banned Haines for life from flying on their planes.

Take it easy at the airport bars, especially if you’re popping pills.

A woman who yelled "I'm going to kill you all" and tried to open the door of a plane midway through a flight has been jailed for two years https://t.co/VDLbBzXG1i