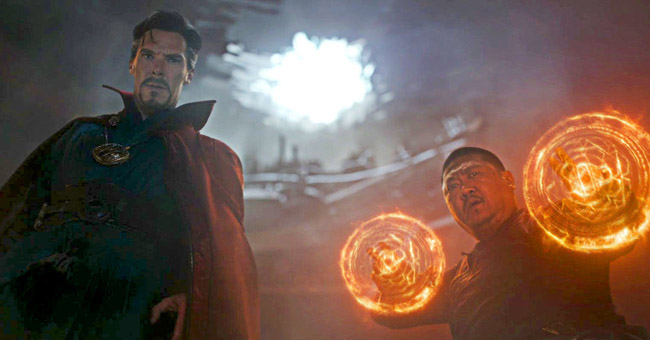 So with that in mind I am going to go ahead and drop some spoileriffic stuff about the movie that those who have seen Avengers: Infinity War have been sharing on this very internet that you are using right now.

On Wednesday, the internet was overrun (and sort of still is) by memes based on the shocking ending to Avengers: Infinity War. There has even been a HOW-TO guide created showing everyone a simple way to create your very own Infinity War ending meme. (By the way, if you have been wondering if you were spared in Thanos’ culling of half the universe, there’s also a web site for that. I, apparently, was slain by Thanos, for the good of the Universe.)

The internet being the internet, today we have yet another A+ Avengers: Infinity War meme to entertain ourselves with, and this meme is one that we can put to good use on a regular basis even after the movie finally leaves theaters in about six months or so.

Remember that scene in Infinity War where Doctor Strange, Wong, Bruce Banner and Tony Stark head to the streets and run into the Ebony Maw and Cull Obsidian? Sure you do. Now, do you remember how Wong pretty much said “peace out” as Banner was getting ready to call Cap? Yeah, well, that’s your new Infinity War meme.

Wong: What you boutta do?

Bruce: Make a call, what about you?

Wong after one battle with the Black Order #InfinityWar pic.twitter.com/Yu8eKfrY7h

wong vs. everyone else in infinity war pic.twitter.com/XsiM7E5QGz

The Avengers: Alright so Thanos coming we gotta get ready

While the Avengers were out after Thanos my man Wong was in the crib like pic.twitter.com/tIamM66GSh

Wong called it a day after ONE BATTLE. He was like I’ll see y’all niggas at the crib pic.twitter.com/N4YwMKFDPN

Plot twist while Wong out there thinking he safe POOF he turns to dust pic.twitter.com/MCcQ1UyyrD

It’s also a meme that people have realized they can use anytime you want to get out of attending something slightly less dire than The Black Order attacking your city.

"Hey I'm celebrating my birthday at a restaurant. You're invited!"

“sorry I missed your texts just woke up” pic.twitter.com/f7nArdvrEK

Bruce: We might need your help
Wong: uhhhh I uhhhh got to uhhhhh fix the stairs and the roof pic.twitter.com/FnmOepOYL4

Can we get a movie just showing what Wong was doing during Infinity War?

I would totally watch that.