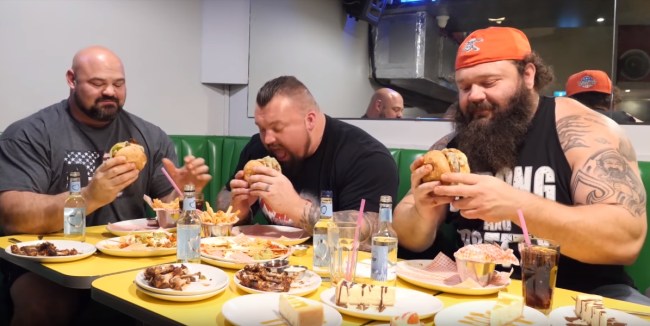 When we last saw strongman Brian Shaw, he attempted to eat the entire Taco Bell menu. It didn’t go well and he immediately regretted his decision. The four-time winner of The World’s Strongest Man is finally off his porcelain throne and back in action. He recently took a flight with fellow strongman and friend Eddie “The Beast” Hall and they were seated directly next to one another, which made for a hilarious photo.

NEW YORK APRIL 25TH @eddiehallwsm AND MYSELF ARE COMING TO @globalstrongmangym 4PM TO 830PM – We will be doing a meet and greet Strongman seminar that will be a one time event that you won’t want to miss!! – Spots are going very fast so email hans@globalstrongmangym.com or call 347-425-1400 to reserve your spot!! #globalstrongmangym #newyork #strongman #strongwoman

Eddie Hall, who was declared the World’s Strongest Man in 2017, is a big boy. He is 6-ft-3-in tall and weighs approximately 360 pounds, and that is actually way slimmer than he was months ago. Eddie lost over 80 pounds by going on a new diet and adding more cardio to his workouts, learn more about how he did it HERE.

Brian Shaw is definitely not your typical human being either as he stands in at 6-ft-8-in and weighs about 420 pounds. The duo of strongmen were both taking a flight from London to Scotland. They were seated next to each other and both squeezed into the tiny economy class seats. We’re gonna need some bigger seats.

The check-in ladies sat me and @shawstrength right next to each other on the plane from London to Scotland and no-one on the plane would swap seats…. Would you swap seats with one of us???…. I wouldn’t either 😂 #FuckMyLife Big Love The Beast

I think the plane is going to tip over and if you ever get off the ground the airplane is going to do barrel rolls. Good luck getting the beverage cart down the aisle with The Beast falling out of his seat.

Shaw and Hall also attempted a 20,000 calorie strongman cheat day meal challenge, let’s hope they did this after they took their flight. They were joined by Robert Oberst, another World’s Strongest Man competitor, who was a finalist in the competitions in 2013 and 2018. The trio of hulking men went to a burger joint and attempted something called the “Muenster Challenge,” which is apparently a four-patty burger doused with melted Muenster cheese. They also ordered two orders of nachos, wings, fries, cheesecake and ice cream. So much for Eddie’s diet. Oberst ordered a Diet Coke with his 7,000 calorie meal because those 120 calories from soda would have been too much.

The three behemoths were able to stuff all that food down their throats in the eating challenge, but at one point Eddie nearly became sick from eating so much. Eddie nearly puking in a restaurant was much to the delight of his fellow strongmen. 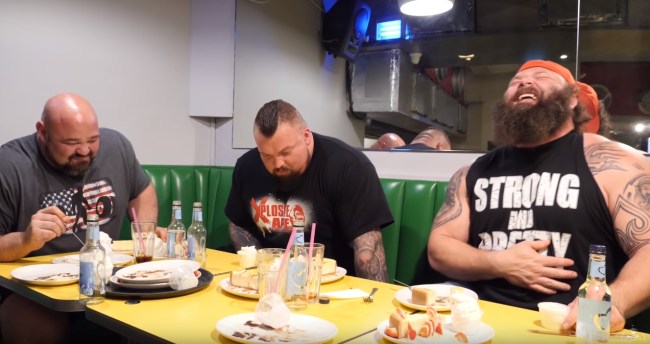