YouTube Star Accidentally Uploads Video Of Her Hitting, Spitting On And Yelling At Her Dog, Police Investigating Abuse 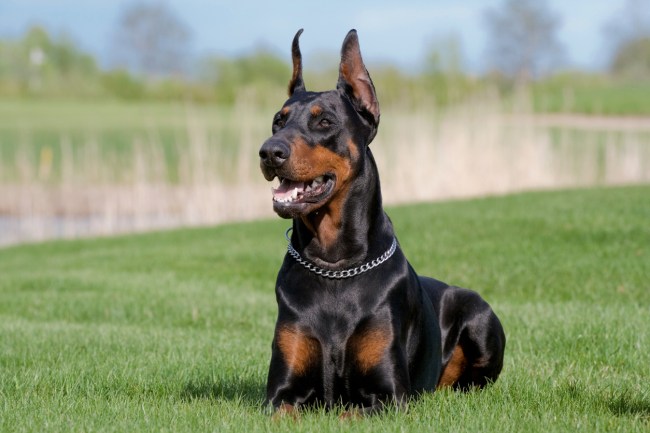 A YouTube star faces much criticism after she accidentally uploaded a video of her abusing her dog. Now, police are investigating the social media influencer after footage of the animal abuse went viral.

Brooke Houts has over 333,000 subscribers on YouTube and her videos amassed nearly 20 million views. Many of her videos featured her dog, a Doberman named Sphinx.

Brooke recently uploaded worrisome footage of her hitting her dog, then spitting on him and yelling at him because the dog was trying to get some love from her while she was recording a video.

On Tuesday, Houts accidentally uploaded a video to her YouTube channel with raw footage. The clip shows Brooke becoming angry at her excited dog because it was interrupting her video.

RELATED: Influencer Must Pay $22K And Gets Banned From Youtube After Feeding Homeless Man Toothpaste-Filled Oreos

In the video, she smacked Sphinx in the face, violently pinned her dog to the ground, screamed at the dog, spit on the dog, aggressively shoved the dog, and then yells at the dog again by screeching: “Lay down!” The video was deleted from YouTube, but it has been shared on Twitter where it went viral with over 30 million views.

This makes my blood BOIL. How dare you blame this on “training” your dog. @brookehouts. You are disgusting. You deserve both your channel taken down, and your beautiful puppy be given to a deserving home you monster. pic.twitter.com/DaoRdkbsj1

The “premise” of the video from August 6 was to play a prank on Sphinx by putting plastic wrap up. The caption for the video read: “Hey guys! Me & me favorite dog ever are here to bring you a plastic wrap prank lol, this is probably the shortest video to ever go up on my channel but I hope you like it!!! Let us know if you wanna see more pranks.”

Brooke accidentally uploaded the raw version with the abuse. Once she realized the error, she deleted the video and replaced it with the edited video that cut out the animal abuse. The polished video has since been deleted as well.

The controversy over the YouTube video created a whirlwind of criticisms. Eventually, authorities were contacted. The Los Angeles Police Department received complaints and instructed the Animal Cruelty unit to launch an investigation.

“Our Animal Cruelty Task Force has received numerous complaints about the video you’re speaking of and we are currently looking into the matter,” a spokesperson for the LAPD said.

RELATED: Vlogger Tries To Eat Live Octopus In Livestream But Gets Her Face Eaten Instead

Since the abuse surfaced, many people have offered to adopt Sphinx.

Im in la and will literally buy your dog from you name any price, he really does need a new home.

Brooke issued a statement and an apology on her Twitter account for her actions in the dog abuse video.

Anything I say isn’t going to make those who believe I’m a bad person stop believing that, and I’m aware of this. I apologize to anyone who has been effected negatively by the footage. First off, I want to address the uncut footage. On the day in particular that the video was filmed, and actually this past week, things in my outside life have been less than exceptional. I am not going to play the “victim card” or anything of that sort, but I do want to point out that I am rarely as upset as what was shown in the footage. The bubbly, happy-go-lucky Brooke that you often see in my videos is typically an accurate representation of me, but it’s obvious that I’m playing up my mood in this video when I’m clearly actually frustrated.

That being said, this does NOT justify me yelling at my dog in the way that I did, and I’m fully aware of that. Should I have gotten as angry as I did in the video? No. Should I have raised my voice and yelled at him? No. However, when my 75 lb. Doberman is jumping up in my face with his mouth open, I do, as a dog parent, have to show him that this behavior is unacceptable. But I want to make it known, REGARDLESS of what my dog does, I should not have acted that way towards him.

I want to clarify that I am NOT a dog abuser or animal abuser in any way, shape, or form. Anyone who has witnessed or heard true animal abuse will be able to clearly see that. My dog, in no way, shape, or form was hurt by any action that I displayed in this video. I know people are going to say “you don’t know how he really feels” and this is true. But if he was audibly and physically in pain, it would be a different story. I also did NOT spit on my dog, but I understand how it could look like I did. Did I get in his face and take unnecessary actions towards him? Yes I did, and that was not the way I should’ve handled the situation. Did I spit on my dog? No.

My family and I are in the process of getting him training. The training that I have been looking at for him is VERY expensive, because it’d have to be 1-on-1 with a trainer. Ever since he was attacked at the dog park, he isn’t okay with being around other dogs. He sticks to me like velcro if he is in the presence of another dog, even a little chihuahua. I just can’t see him getting what he needs from a group training environment. That being said, I know I personally can learn more effective techniques to get his energy out and keep him disciplined as well.

Anyone who knows me personally knows I have an immense love for animals, including my own. I would never do anything to purposefully physically or mentally harm any animal. Again, I should NOT have yelled at him or have been as physically aggressive as I was, and I’m fully aware of that. He was not hurt, nor has he ever been purposefully hurt by me. I know I’ll be in many future situations where he’s being physical, but I will not respond this way again.

Family or friends that have spent any amount of time with Sphinx and me know that we have a trusting, loving relationship. All he wants to do is be by my side, cuddle with me, and be around me, which I love. My love for him is exponential and infinite, and I do everything I can in my day-to-day life to ensure that he is living as happily as he can. I’m sorry that my actions in that particular moment did not reflect that.

About my twitter- I deactivated my account earlier in the day. When I went to open it, I was met with an excess of notifications of people telling me I’m messed up, a bad person, that I’m going to hell, that I belong in jail, etc. For my own mental health, and no other reason besides that, I didn’t think it was necessary for me to be reading those comments at that time. Lastly, I don’t want to make this statement seem like it’s me defending myself, because that is not my goal. I do want to point out what ACTUALLY happened though. My intent by explaining the situation is to give those of you who are rightfully angry with me the explanation that you deserve. I am getting my dog into training, and I’m looking at ways to improve how I personally train him at home. I am sorry that you guys had to watch that footage and were upset by it, and I’m sorry to my dog for raising my voice and acting aggressively.

In my heart and from the words of the people that spend the most time with me, I know that I am a great dog mom (but not perfect), that I spoil him in the best ways, that he gets all the treats he could ever want, and that the Amazon Prime mailman is probably tired of delivering packages of dog toys to my house. Again, this does not make my actions in the footage okay, but I’m just explaining what my day-to-day life is really like, whether you believe me or not.

On a serious note, I love you guys, and I want to THANK YOU for pointing out things that you think are wrong and discussing them, because the world needs more of that. I hope you give me the chance to prove that these statements about myself do align with my actions. All my love, Brooke Houts

To everyone who has been commenting on my social media as of recently: pic.twitter.com/gnxUbfVHdf

Brooke Houts also started an Instagram account for Sphinx and he appears to be a very, very good boy.

RELATED: Belle Delphine, Cosplay Model Who Went Viral For Selling Bathwater, Banned From Instagram Where She Had 4.5 Million Followers