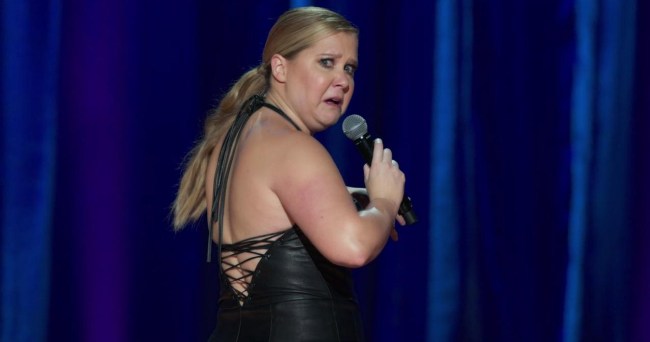 It does not help that Schumer admitted that she not only listens to Zach’s stand-up, but also venerates him. Amy did an interview with the AV Club back in October of 2013 where they asked Schumer: “Do you have an all-time favorite routine or joke? What makes a bit timeless?”

My favorite joke for years now is a Zach Galifianakis joke. I may be butchering it a little bit, but he says, “People are always mistaking things I say as racist. The other day, this guy thought I called him a ‘sand (racial slur deleted).’ But what I said was, ‘Get out of the sand, (racial slur deleted). Volleyball is a white man’s sport.”’ Nothing has come close to replacing that joke.

What makes it worse is that if Amy did steal the joke, she didn’t execute the joke as well as Galifianakis did. Zach makes himself the brunt of the joke, by coming off as an erudite and debonaire gentleman, but then can’t even use the correct language. In Amy’s version, she insists that the audience is falsely arrogant. Instead of her being the joke, she paints the crowd and viewer as dumb people who can’t pronounce a word properly.

By itself, simply mispronouncing the word “read” could easily be parallel thinking since it’s not a super complicated concept. However, Schumer has been accused of stealing jokes from numerous comics over the years. So many stolen jokes that there’s an 11-minute video of allegations of Amy’s joke thievery.

This video doesn’t even include the instances of alleged stolen material from Dave Chappelle and Dave Attell on her new Netflix comedy special. The special, Amy Schumer: The Leather Special, has been getting destroyed by bad reviews. Amy responded by saying that “alt right organized trolls attack everything I do” and “organize to get my ratings down.”

Do they have betting odds on which comic will be the next victim of Schumer’s alleged joke pilferage? I’d put money on Dane Cook.