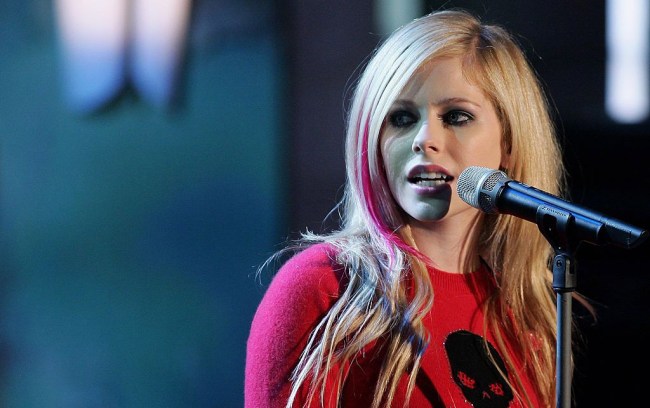 Pretty much the only time we report on Avril Lavigne anymore is when she’s lashing out at someone for making fun of Nickelback.

That, or when she’s making out with Winnie Cooper from The Wonder Years. One of those things.

However, now an old conspiracy theory that Lavigne killed herself in 2003 and was replaced by a lookalike named Melissa has once again taken root. With hilarious results.

You see, now Lavigne can’t post a single thing on Twitter without folks coming out of the woodwork to troll her for not really being Avril Lavigne, but in reality being Melissa.

For example, here’s a tweet Lavigne posted on Tuesday.

Beginning production this week for the album. Wahoo. Pouring my heart & soul into writing these new songs for you guys. Can't wait !!!! pic.twitter.com/M8vBnkP1D4

Check out these responses…

@AvrilLavigne Melissa, is that you? pic.twitter.com/RLN2qGhY7A

@IsraelLBS @AvrilLavigne That's what Melissa would want you to think

.@AvrilLavigne this is a cry for help pic.twitter.com/6pxqqSK4jI

Heck, Lavigne can’t even post a nice tribute to her mom without being inundated with people calling her Melissa…

Happy Mother's Day to my incredible mother and everyone else's mom's out there! pic.twitter.com/IiBPYyWfFa

@AvrilLavigne Melissa it's okay. We're here for you.

@AvrilLavigne I SEE YOU MELISSA YOU TRICK ASS BITCH

@AvrilLavigne Melissa, please. Tell us where the body is.

The best part of it all though, at least to me, is that Avril has made no attempt whatsoever to shut them all up. Maybe she really is Melissa after all?