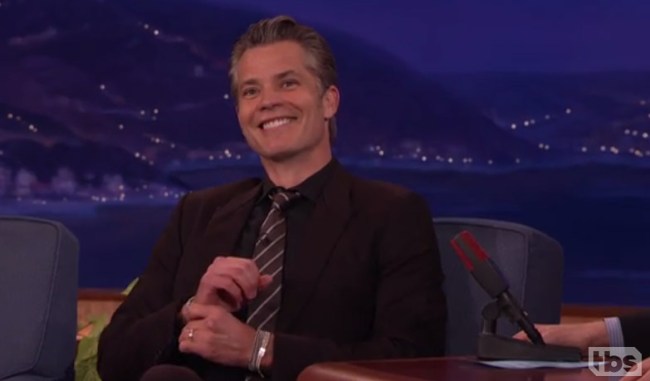 I recently finished watching all six seasons of Justified so I am still nursing a mild Raylan Given man-crush. So when I saw that Timothy Olyphant was going to be on Conan I had to check it out.

Turns out I was well-rewarded because his story of smoking some of Willie Nelson’s weed at Austin City Limits was one for the memory book.

Before they even got to that story though, Conan and Andy were already impressed that Olyphant showed up to the show in a suit. As Andy put it, “You can tell he’s serious because he’s not wearing flip-flops.” To which Conan replied, “I know. This is the most dressed-up you’ve ever been. You always come here like a weed dealer. You do. You look like you just stumbled out of Spicoli’s van and made your way out here.”

I’m guessing that part of Olyphant’s usual DGAF attitude stems from the fact that he is a member of the ridiculously wealthy Vanderbilt family. Which, of course, only makes me wish I could trade places with him even more at this point.

It was also this description of his usual laid-back attire that led to the discussion of Olyphant smoking some of Willie Nelson’s weed at Austin City Limits.

The entire story was completely fantastic, but the highlight had to be when Olyphant says that his brother told him to take it easy and Olyphant goes, “I’m just… two hits.” After which he paused for effect and said, “Uhhh, it was at least one hit too many.”

What happened next was beautiful and really makes me want to get me a little bit of that extra special Willie Weed. Check it out…