Welcome to the BroBible New Music Round-Up, where Coronavirus or not, the show must go on. For more follow me on Twitter:  @ryanoconnell79

We are about two weeks away from the release of Pearl Jam’s new album Gigaton and with that in mind, this week’s playlist is here to help get us in the right state of mind. 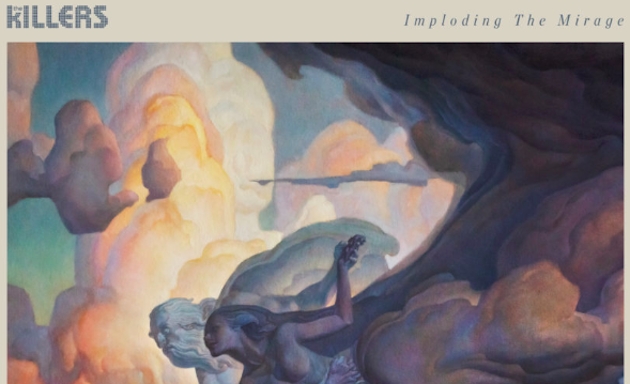 If you thought a massive global pandemic was going to stand in the way of Jay Electronica finally, and I can’t stress this enough, finally releasing his debut album, you, my friend, were wrong.

In a move comparable to only the Loch Ness Monster being caught sunbathing, the long-awaited debut album from Jay Electronica dropped on Friday. The album had only been in the works for nearly fifteen years.

It was back in 2007 when Jay Electronica first emerged, rapping over the score to the movie Eternal Sunshine of the Spotless Mind. The project was so unique and filled with so much promise, anticipation about what the New Orleans rapper would do next quickly reached fever pitch levels.

However, Jay played it slow. He dropped a few singles here and there, dipped out for a bit, released another song or two, dipped out some more, and thus it went on for the next decade or so. Then rumors of an album actually started to emerge and pick up steam, culminating in the rapper himself taking to Twitter in February to say that his album would be coming out “in 40 days.”

Sure enough, he was true to his word.

A Written Testimony comes with a murderers row of heavy hitters including Jay-Z (who is all over the place on the album,) Travis Scott, and The-Dream. James Blake and Khruangbin had a hand in writing a few songs while the album’s producers include Swizz Beatz, Hit-Boy, the Alchemist, No I.D., Young Guru, and AraabMuzik.

It's ridiculous we're actually listening to a Jay Electronica album. And it's really ridiculous Jay-Z is still spitting like this nearly a quarter century after 'Reasonable Doubt.'

It’s also ridiculous that it took so long, but who am I to complain. Actually, who are any of us to complain?

A few weeks ago, Justin Timberlake released a new tune with Meek Mill and with the release, there were comments from Timberlake saying that he had been itching to work with younger, hungrier artists.

I filed this under: “interesting.”

Since then, the last two releases we’ve gotten from Timberlake have been collaborations with SZA and now Anderson .Paak, two artists that I would definitely categorize as both “young” and “hungry.” The songs have also been a hell of a lot of fun.

“Don’t Slack,” much like the SZA tune, are part of the recently released soundtrack to Trolls World Tour, a movie you will definitely see if you have kids. Or like trolls. Or cartoons.

Listen, I’m not here to judge.

No one should be judging.

Brass Against is a New Music Round-Up favorite. The Brooklyn-based band has made noise over the past couple of years with their brass-heavy covers of Rage Against the Machine, Tool, Living Colour, Anthrax, Audioslave, Black Sabbath and more.

Now the band is giving their own tunes a shot.

“Umbra” is their first release off of their upcoming EP, which comes out on April 10. The song features vocalist Sophia Urista, who has appeared on several of the band’s songs in the past and in keeping with the vibe of the tunes they have covered, “Umbra” is heavy, ferocious, angry, and intense.

Monophonics It’s Only Us

It has been a few years since Monophonics released Sound of Sinning and like with a lot of us, they’ve changed some during that time.

“Our last record came out in 2015, and a lot has happened as musicians — and people,” frontman Kelly Finnigan recently told Billboard. “There’s been growth and finding new ways to explore the sound, personal growth, people starting families, taking on new challenges in their personal lives. I think that always creeps into the music.”

The result is a new album that leans heavily on the soul sounds of greats like Curtis Mayfield with tight grooves, smooth horn parts, and straight-up delicious vocals.

Numerous studies have shown that soul music, especially done right, can be extremely comforting and that could be a good thing right now.

You know, BECAUSE OF THE GLOBAL PANDEMIC!

Back in November of last year, The Killers announced that they’d have a new album coming out in early 2020. The album had a title, Imploding the Mirage, but that was about it.

There wasn’t a single to come with the news, nor was there a release date.

That’s not how this works guys.

Everyone knows that you announce an album with a new song and then tell us when or roughly when the album will be released. This isn’t a new process. This is literally how it’s been done forever.

Earlier this week the band finally got around to completing those last two steps when they appeared on Beats 1 Radio with Zane Lowe. The band debuted “Caution,” a track featuring former Fleetwood Mac guitarist Lindsey Buckingham, and confirmed that the new album would be out on March 29.

The new album, which is the band’s first since 2017’s Wonderful Wonderful, will also feature contributions from k.d Lang, Adam Granduciel of War on Drugs, Lucious and more.

And speaking of killers, have I mentioned that THERE IS A GLOBAL PANDEMIC right now? 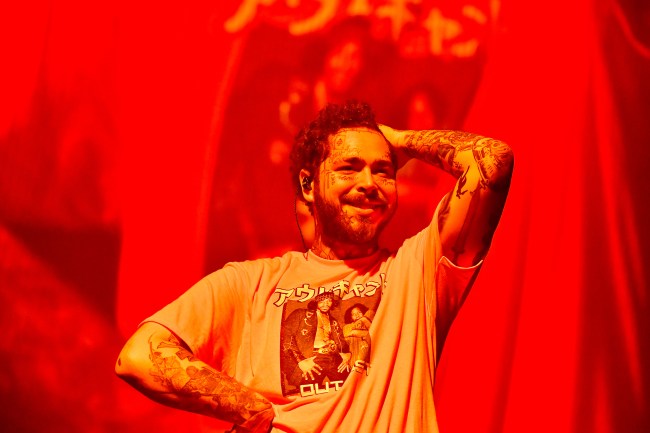 So, About Those Shows You Were Going To…

Everything is canceled or postponed.

Well, almost everything is canceled.

Getting more video from inside @pepsicenter. Thought I was seeing empty seats for @PostMalone in the middle of COVID-19 outbreak. Turns out… it’s packed. So much for social distancing. #9News pic.twitter.com/8uPbHN0lEi

Correct decision. I'm not sure how you can coordinate a global response to a pandemic AND tour the UK at the same time. https://t.co/5oiAREzKui

Look at Coldplay, Out There, Being Interesting

I have to admit that a year or so ago, the future of Coldplay was not even in the top 10 of things I was interested in when it came to what the future holds for certain bands. I had kind of written the group off.

As you can see from this chart, my interest in them had wained significantly as the years had gone on. 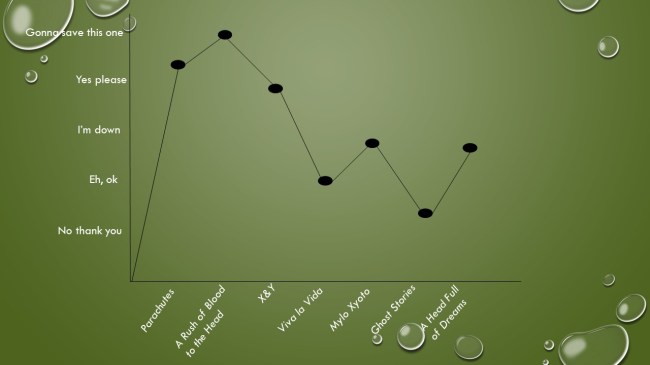 Then they released a new album, Everyday Life, and it was fine; a little hit or miss, but ultimately fine. As it currently stands, “Arabesque” is the only song that has continued to really live on.

But things changed and earlier this week, Coldplay stopped by NPR to perform a tiny desk concert and you know, it was kind of cool.

Backed by a nine-person gospel choir, Coldplay covered Prince’s “1999”. They also performed “Viva La Vida”, as well as “Cry Cry Cry”, “Broken,” and “Champion of the World” from their new album.

Again, I have to say, the performance was kind of cool and made me re-think how much I cared about what the future holds for Coldplay.

Well, provided there is a future because you know, GLOBAL PANDEMIC.

This Week In Late-Night TV Performances

And Now, A Word From President Cardi B

Cardi shares her opinion on the #coronavirus 🗣 pic.twitter.com/CxWGCOZ1i3

And speaking of dope “Sledgehammer” covers, I’d be remiss not to share this one from a few years back by Gavin Castleton.

Kids, don’t let anyone tell you that “Sledgehammer” is not a great song.

i smiled i screamed i cried i cheered all in 27 seconds pic.twitter.com/9JMOcx8qqI