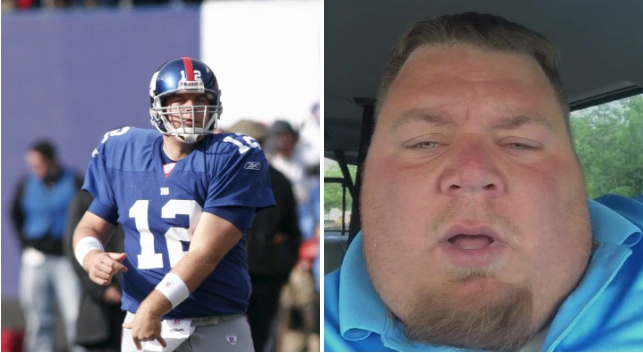 Jared Lorenzen’s post-NFL career has largely consisted of microwavable salisbury steaks, lasagnas, Kentucky Fried Chicken, fish sticks, and mac and cheese. Awful dieting and his abandonment of exercise transformed the 37-year-old from a 6-4 and 285 pounder during his playing days to a scary 502.8 pounds earlier this year.

The former Giants backup affectionately known as the “Hefty Lefty” knew it was time for a life overhaul when he teamed up with renowned celebrity nutritionist Dr. Philip Goglia and celebrity trainer Gunnar Peterson to start “The Jared Lorenzen Project.” He started the lifestyle and dieting initiative in the summer of last year to inspire others to partake in his weight loss journey as well.

Well, less than a year from birthing the project, Lorenzen announced that he’s dropped nearly 100 pounds.

But that didn’t come without some setbacks. Lorenzen’s progress was stunted when bloodwork revealed thyroid and testosterone irregularities, diminishing the returns on his workouts. But, after straightening that out, he really started to see progress.

Lorenzen’s daily goal is to walk 10,000 steps a day, sprinkled in with three to four weightlifting workouts per week and two yoga sessions.

As far as his diet, it’s night and day from pounding KFC and microwaveable lasagnas.

“A whole lot of rotisserie chicken” (with the skin off, of course) is a staple of his diet, with shakes for lunch, and strawberries and unsalted cashews for a snack. If he’s craving a scoop of ice cream, he’ll eat a more healthy ice pop or yogurt instead. He allows himself to have a steak occasionally.

The former Eli Manning backup says there are tangential benefits to documenting his weight loss–inspiring others to do the same.