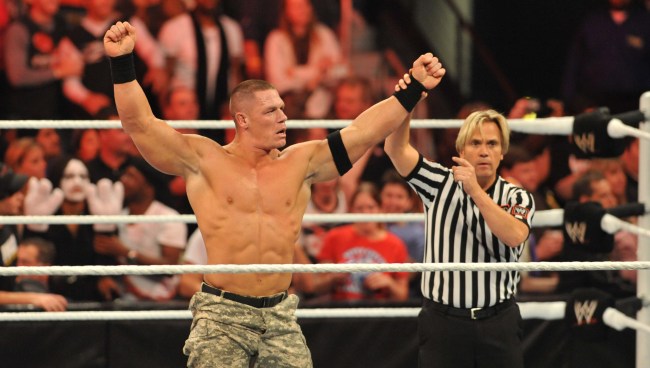 16-time WWE world champion John Cena has been making some serious moves in his attempt to follow in The Rock’s footsteps and become the next wrestler to hit it big in Hollywood.

Just the other day, Vin Diesel announced that Cena will be appearing in Fast and Furious 9 when it hits theaters on May 22, 2020. (Surely, Cena getting the role had nothing to do with his WWE rival The Rock repeatedly laying the verbal smackdown on Diesel following Fast and Furious 8, right?)

Cena has also been rumored to be a part of the cast of the re-jiggereed Suicide Squad movie being directed by James Gunn of Guardians of the Galaxy fame.

A big part of the reason, after almost 20 years in wrestling, that the 42-year-old Cena is still going strong has a lot to with the regimen his trainer Rob MacIntyre puts him through to build size and strength. (MacIntyre also trains WWE wrestlers like Drew McIntyre, Cesaro, Big E, Natalya, Lana, Rusev, Sheamus, and others.)

Recently, MacIntyre shared with Men’s Journal the six-week workout program that The Champ uses and while very doable, it’s certainly not suitable for any candy-ass jabronis.

The workouts that follow are Cena’s actual routine, modified only slightly for those less experienced. The 10-time WWE champ and two-time World Heavyweight champ tries to hit a new max on his main lifts every six weeks. Follow the program, and you can break your old records in that same time and reap the muscle gains that come from lifting bigger weights.

In this clip you get 2 different snatch faces from @johncena and a slowMO bar drop. Good value for your 30 seconds of watching.

Use the following chart for squat, front squat and leg curl sets and reps…

Do workouts with notations of a, b or c in circuit fashion.

A lifting of weights by a person. Sums up what goes on around here.

For a complete breakdown of John Cena’s six-week workout program, including directions on how to do each aspect, visit MensJournal.com.