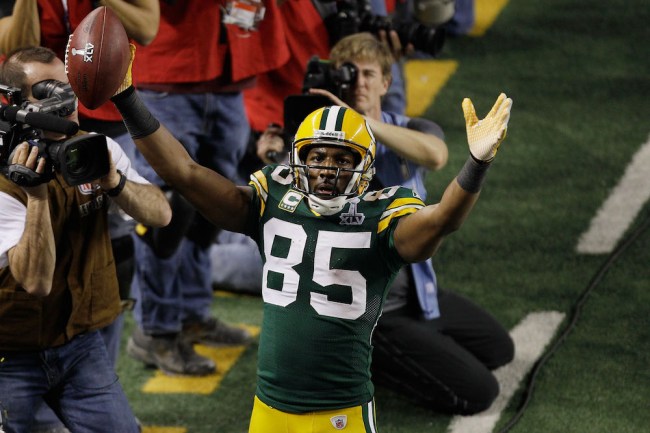 Former NFL players trimming down after retiring is not a new phenomenon.

Remember how much weight Gronk lost after he said goodbye to the Patriots? And former Browns lineman Joe Thomas looked like a completely different person.

Packers star Greg Jennings is taking his fitness game to the next by getting insanely shredded.

The former wide receiver and current FOX Sports analyst retired in 2016 and immediately threw himself into the world of competitive bodybuilding.

In a recent Instagram post, Jennings discussed his journey and transformation by posting Then and Now photos.

In the caption, Jennings writes:

Before I completely close the door on this my first prep, and competition. I thought it would be only fitting to recap. I don’t celebrate myself that well so don’t expect me to talk about becoming Mr. Minnesota 🤷🏾‍♂️.

November 4, 2019 I began this transformation. This health & fitness journey was one I had experience with primarily surrounding the world of sport. Physically I knew I would be up to the challenge. Mentally was where I had my greatest question.

Would I be willing to go all in again?

Would I push beyond, beyond?

Could I revive the disciplines it takes to be great?

Initially what I failed to remember was. The answer to all those question are only revealed while exposed to and consumed with the process.

See often time we selfishly think our experiences are solely for our own benefit. We couldn’t be more ignorant.

This experience was not only to better myself but to also inform me that what worked “back then” may not work “here and now”.

I had to surround myself with a new support system. Individuals who knew more than me, individuals that would only take what was needed from “back then” and help me to apply it to “here and now”. Meanwhile, they were being ushered into new territories as well. Areas that would better equip them as we collectively progressed.

Finally, this experience was also for you. To show you that you too can accomplish any goal you set. All you/we need is a tinch of inspiration. For me that was @nicole.jennings85 running a marathon.

If you haven’t realized it yet let me help you. Our world needs inspiration. It’s the inspiration that sparks the interest that will ultimately be the change we all so desperately need.🙏🏾

Remember this! Now will eventually become Then so don’t flatter yourself to long. You have better in you.

Jennings obviously hopes his results will motivate others to lifestyle changes. He posts weekly check-ins towards his goal to make his pro debut and workout videos to inspire others to hit the gym (if it’s currently open.)

Jennings played for 10 years in the NFL with the Packers, Vikings, and Dolphins. The two-time Pro Bowl wide receiver won a Super Bowl with the Packers in 2010 and retired with 571 receptions, 8,291 receiving yards, and 64 touchdowns.