#bourbon
BroBible may earn a commission if you buy a product or service via links in this article.
by Cass AndersonSeptember 3, 2021 3:25 pm 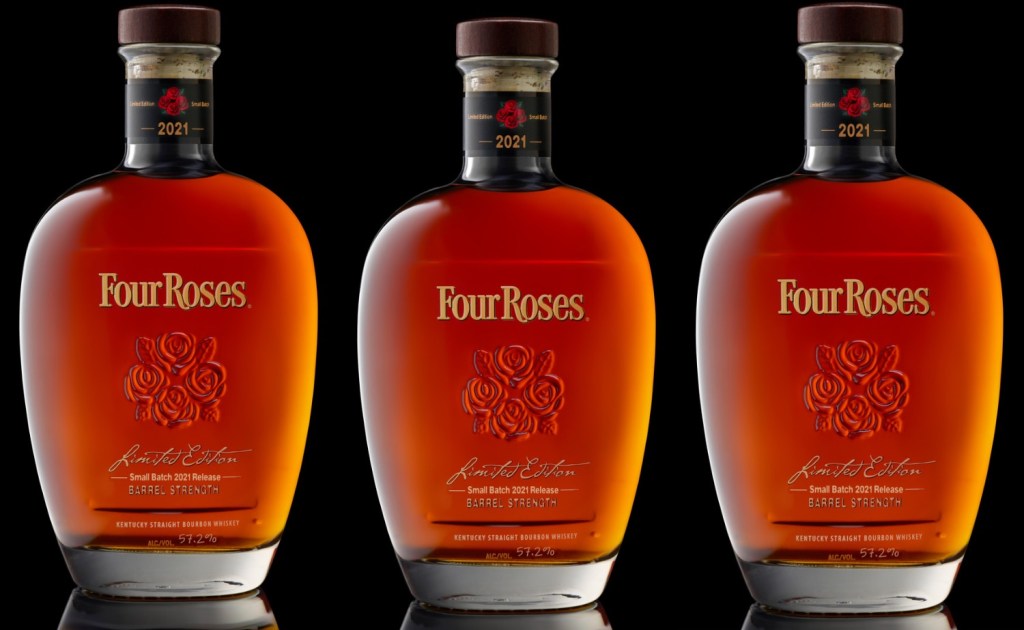 The 2021 Four Roses Small Batch Limited Edition is here. Well, kind of. It’s here in the sense that samples have been distributed to industry VIPs and those bourbon connoisseurs are once again raving over this year’s blend.

The Small Batch Limited Edition release from Four Roses is one of the most highly sought-after bourbons every single year and it has nothing to do with hype, this release always delivers an exquisite bourbon. I had the opportunity to sample the 2021 Four Roses Small Batch Limited Edition with Master Distiller Brent Elliott and I have to say that this year’s blend matched nearly perfect with my current palate which is something we discussed about this release.

We’ve got details on how you can score a bottle of the 2021 Four Roses Small Batch Limited Edition (it’ll be a lottery), how many bottles are available to the public, what’s in this year’s blend, and tasting notes. Let’s get after it, shall we? 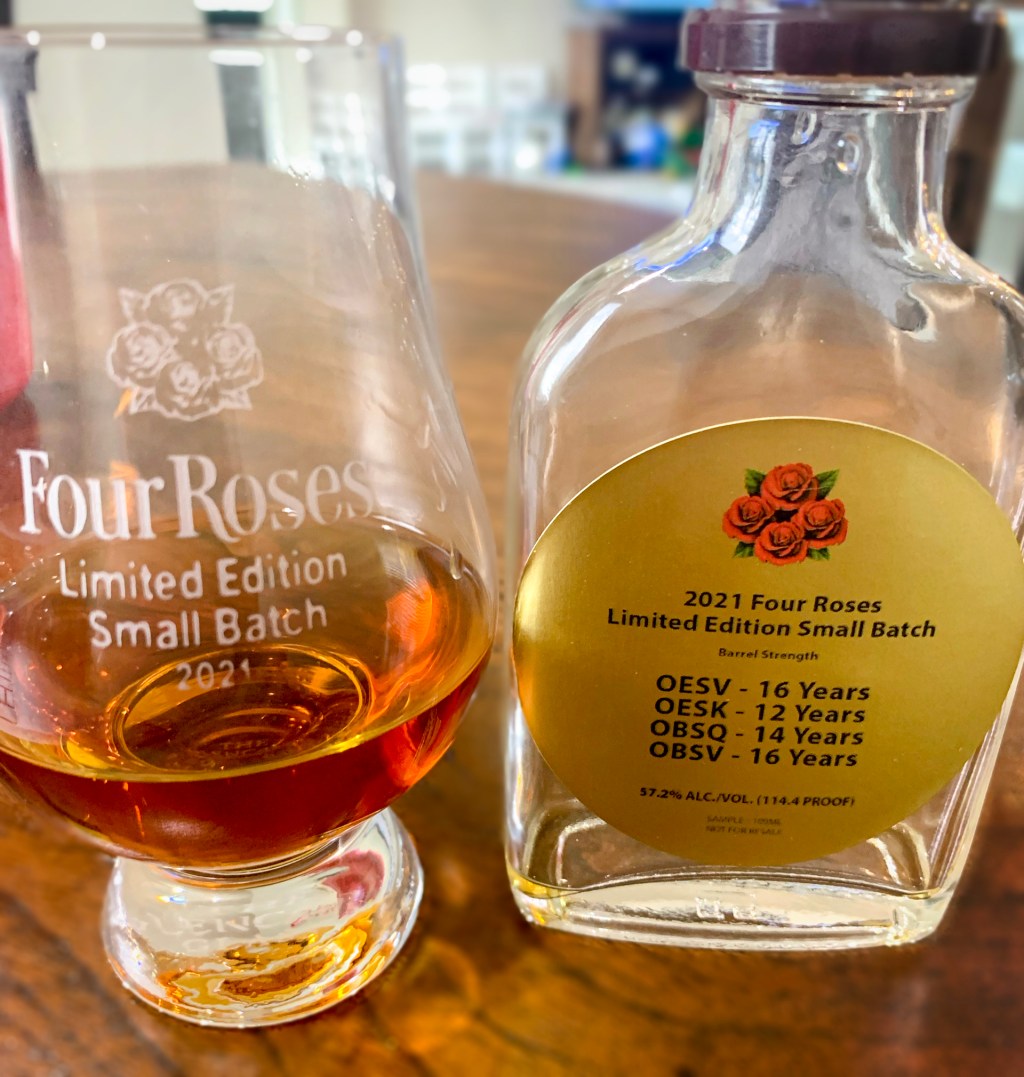 Okay, so, if you’ve made it this far in the article and it feels like you need to break some codes and don’t understand those letters above, let’s take a step back and explain that real quick (there’s also a picture below). Four Roses has 10 distinct recipes which are made up using 2 mashbills and 5 yeasts. Masbhill B is a 60% corn, 35% Rye, 5% malted barley and obviously heavy on the Rye (which I love). Mashbill E is 75% Corn, 20% Rye, 5% Malted Barley and highlights the flavors of bright grains.

Then there are 5 distinct Yeasts (V, K, O, Q, and F) each with unique flavors ranging from florals to fruits to spice. When you start to combine these mashbills and yeasts we get the 10 recipes: OBSV, OBSK, OBSO, OBSQ, OBSF, OESV, OESK, OESO, OESQ, and OESF. Four Roses actually has a brilliant visual rundown of the various recipes on their website if you’re more of a visual learner. Here’s what all of that looks like in a chart: 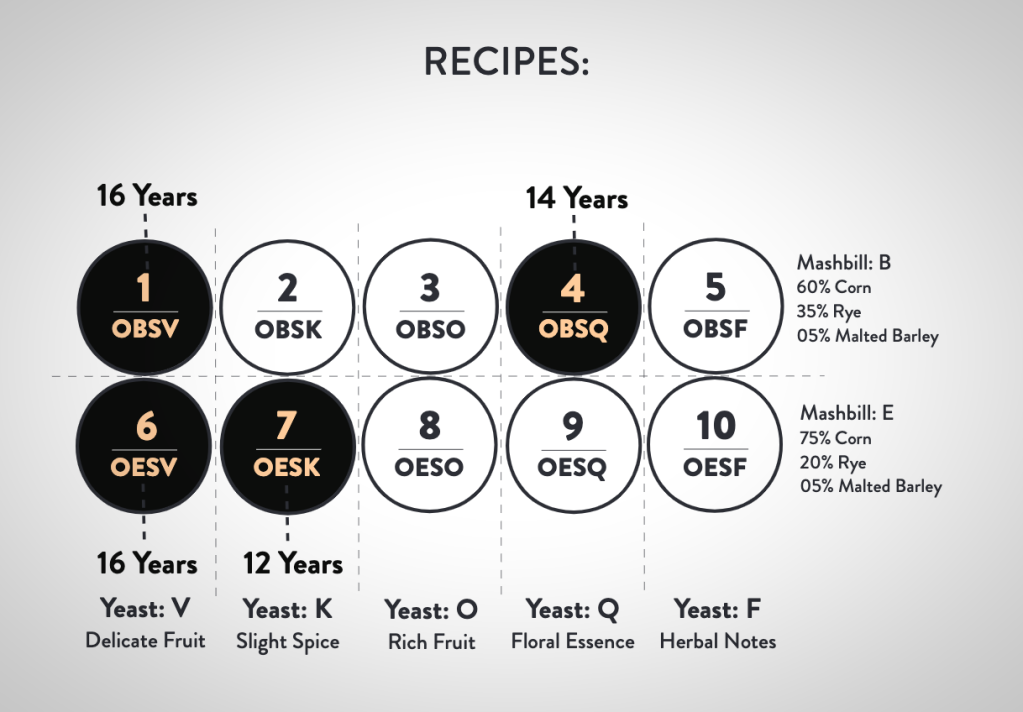 When choosing what goes into the Limited Edition Small Batch release each year, Four Roses master distiller Brent Elliott starts by looking at all of their available 10+ year bourbons. There’s no upper limit no how old the various components can be but they need to be at least 10 years old. The 2020 release had a 19-year bourbon in it. He then hand selects 3 to 4 different batches or recipes of these 10-year-old+ Bourbons to showcase how unique Four Roses bourbon can be.

Going into the 2021 Limited Edition Small Batch, Brent knew he was looking for something that’s mellow and easy to drink which I find intriguing because this has the highest proof of any limited edition small batch. Brent says there’s no real floral component in this but there’s a rich candied flavor from combining the Ks and Vs. And the higher proof packs a toon of flavor up front that you wouldn’t see in other recipes.

Four Roses Master Distiller Brent Elliott told me his main goal with the Limited Edition Small Batch each year is to do something different from the year before. He said going into this year’s LE Small Batch he knew he wanted to do something with the Q’s because it had been a while. Q is more of a top note in the main Four Roses Bourbon recipe but when Q is aged out to 12+ years it packs a ton of flavor.

Once it’s time to actually choose the liquids, Brent said it can be anywhere from a “2, 3 or 6 week process of honing it in perfectly”. He’ll pull 15 to 20 different batches he believes have the potential for the LE Small Batch and from there he allows the various liquids to determine what direction the blend goes. He says he’s never sure if it’s ‘the chicken or the egg’ with this blend.

The OESK and OESV recipes tend to always age really well and at 12, 15, or even 18-years those batches work extremely well as the base for the limited-edition releases. He will also look to the OBSV and OBSK a little less often as the base recipes but from those four it’s then about using the F, O, or Q’s to bring in really unique flavor components. Brent told me the O has such a unique character that a little bit goes a long way in these blends.

The 2021 Limited Edition Small Batch has hints of caramel, vanilla, cinnamon, berry cobbler, and candied apple. It has a rich color and complex finish that can be attributed in part to 16-year Bourbon making up 71% of the final blend.

How much? How many? Where

There are 14,500 bottles of the 2021 Limited Edition Small Batch. They will be made available beginning in late September and will have a suggested retail price of $150. You can take your chances and hope to find it at a liquor store near you or you can go to the Four Roses website, enter their lottery, and if you are selected you can pick up your bottle at the Four Roses gift shop.

To enter the 2021 LE Small Batch lottery you can click right here to visit the Four Roses website. But know this: if you win, you and you alone can pick up the bottle. You cannot send a proxy if you know someone living in or near Kentucky.

What’s Next At Four Roses?

After tasting the 2021 Limited Edition Small Batch we discussed what could be on the radar for Four Roses in the near future. The obvious question is ‘When will Four Roses release a Rye?’ Four Roses Master Distiller Brent Elliott had this to say about when a Rye is coming:

“I get asked that every other day. In years past the answer was always ‘we can’t do it because we can’t do it’. Every bit of space and capacity we have dedicated to the 10 recipes but we just completed a 2019 expansion soon I won’t never say never.

We’re starting to have discussions about what we can do and rye whiskey is in those discussions. I think we could make a great rye and rye is the logical next step. Y’all will be the first to know if and when we do.”

Soooo it sounds like a Four Roses Rye isn’t something we’re going to hear about next week but it also sounds like we’re a lot closer to that reality than we were last year.