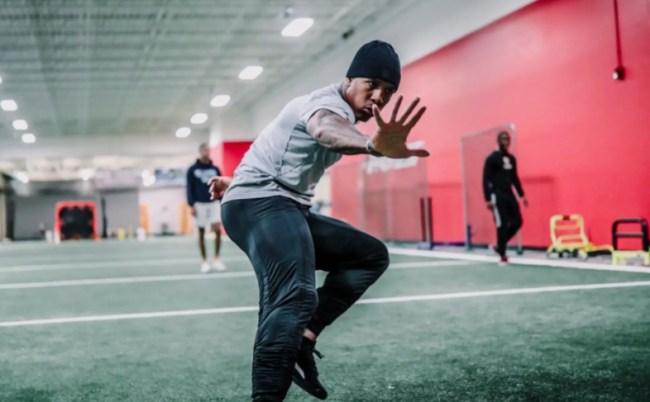 Presented in partnership with AGOGIE…

It is the year of the Lord 2020, and as a society, we have digital money, robots that can do gymnastics, and the ability to print 3-dimensional objects.

We are advancing at an obscene pace in nearly all facets of civilization, so there’s absolutely no reason why we should continue to exercise like pilgrims.

The innovators at AGOGIE are committed to changing that.

While working out with several NFL players and their trainer Myron Flowers, AGOGIE’s founder Aaron Mottern learned that Flowers’s athletes were finding it difficult to add resistance to the body during workouts outside of the gym, thus failing to maximize their workouts.

That is when Mottern came up with the idea that has begun to revolutionize how top athletes from Kobe Bryant’s Mamba Sports Academy to the University of Kentucky conduct their workouts: resistance pants.

The AGOGIE pants have eight built-in resistance bands that add a layer of passive resistance over the natural muscle and ligament lines, creating an exoskeleton of resistance. With AGOGIE, you must work harder to complete the same tasks, with your tendons and ligaments working overtime to shoulder the added workload.

Below is the makeup of the resistance band technology.

This is wearable resistance. 🔹8 rubber resistance bands stitched from ankle to hip. 4 in each leg. 2 in the front surrounding the patella. 2 in the back running down the hamstrings. 💬 Pro tip: the front bands surrounding the patella guide the knee in a straight path, preventing varus/valgus knee angles. #agogie #resistancepants #squats #squatchallenge #squat #squatbooty #squatgirl #squatgoals #fitness #squatgirls #crossfit #crossfitgirls

I had my initial suspicions. Resistance band pants sound a bit gimmicky to the unenlightened.

I eased these puppies in by taking my dog on morning walks and became impressed with the comfort and breathability. For a pair of pants with eight resistance bands in them, they are more comfortable than most of my go-to workout pants. The bands never felt clunky or awkwardly resistant.

I then promoted my AGOGIE’s to aerobic work—stretching and hill runs. It was immediately apparent that the muscles in my legs were more activated than they would ever be otherwise. Blood flow levels felt elevated and for a moment, I felt like I should enter the NFL Draft.

While I remain undrafted, I have begun incorporating AGOGIE’s into three workouts a week. The other two days, I work out in regular workout pants to track the effect. My legs feel dominant, stronger, more toned.

If you’re having doubts, know that I did too. I have seen the light.