#Sponsored
BroBible may earn a commission if you buy a product or service via links in this article.
by Matt KeohanOctober 11, 2021 1:42 pm 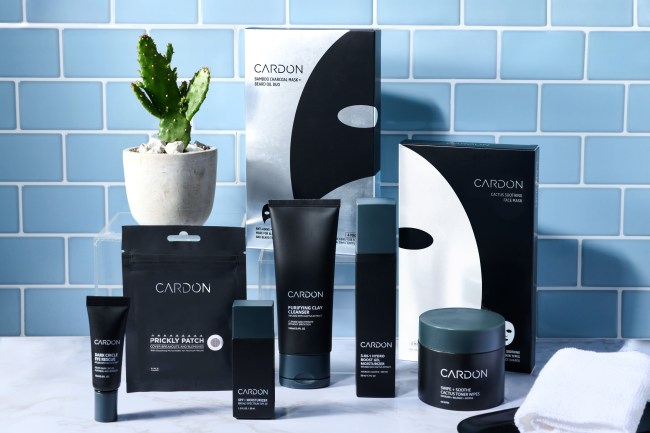 We’ll scoff at the idea of a skincare routine but spend 40 minutes polishing our putters before shooting a 108 on a public track.  We’ll mock a 5-minute skincare tutorial online but catch a ridiculous movie about street car racers in space in theaters.  We’ll beat ourselves up at the gym to sculpt our bodies to become desirable mates while failing to register that sweat-induced oil buildup isn’t on any woman’s vision board.

As evolution persists, future generations of XY chromosomes will view Man’s stubbornness towards skincare with the same disdain we today view people who clap when the plane lands.

I used to be Unenlightened, convinced Exfoliation was an ’80s sci-fi horror movie and skincare routines were just another money ploy by Big Skin.

With the help of the award-winning men’s skincare company Cardon, I’m pleased to announce that I’ve rebranded to a #SkincareGuy, doltish stigma be damned.

Get 15% off your order with code BROBIBLE at Cardon 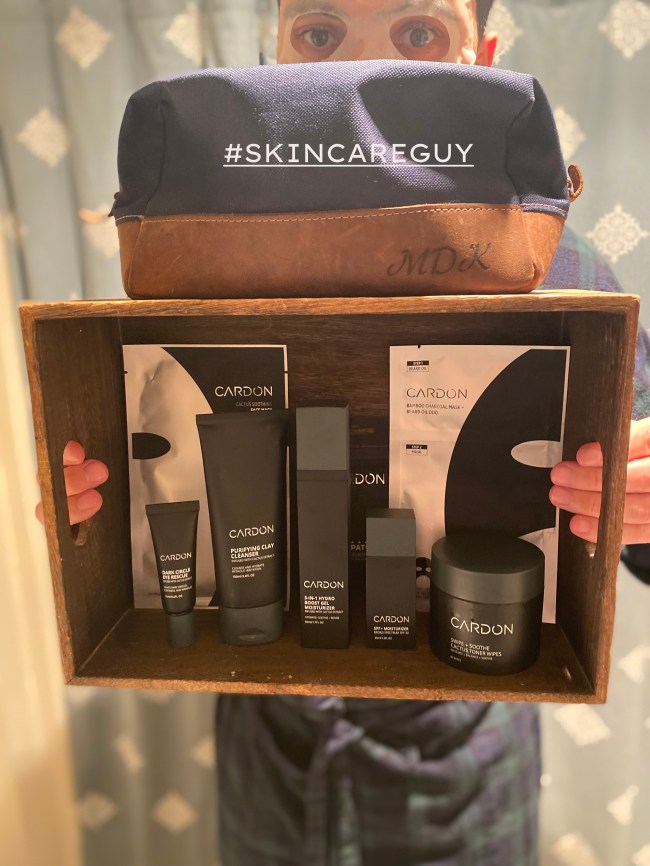 That perpetual summer excess oil that sits on top of my skin like toilet brush water? Cardon’s Purifying Clay Cleanser evaporates it.

My lifelong contempt for sunscreen and its horrid gloopiness? Boom, Daily SPF + Moisturizer.

I have seen the light thanks to Cardon: the cactus-based skincare brand for men.

A note on the importance of cactus extract:

All Cardon products contain cactus extract, a supercharged ingredient packed with vitamins and minerals whose specific function is to help soothe that devilish shaving irritation and redness that torments all of us. With water-binding properties that help your skin retain moisture, cactus extract is a crucial distinguisher from others mens’ brands that allow pungent fragrances to do the heavy-lifting while you go out into the world looking like an army of wasps attacked your jugular.

And its healing properties date back to the Aztecs. If it ain’t broke.

A note on the Battle of the Sexes:

In the past, you may have been tempted to co-opt into your female partner’s skincare routine, only to give up after two weeks due to dubious results and the tireless monotony of its demands. Don’t get down on yourself, this is like trying to go running in her high-heels and wondering why you aren’t shedding pandemic pounds.

Men’s and women’s skin vary significantly in thickness, sebum production, aging trajectories and more. That is why dermatologists recommend each sex approach skincare accordingly. Cardon products are specifically designed to remedy the common skincare calamities men run into—whether it be recalibrating oil levels (which are double those of women) or incorporating clay to most effectively clean mens’ larger pores.

Most importantly for my XY chromosome brethren, the entire “routine” takes, like, 2 minutes. Because we have steaks to cook and bad bets to place.

To promote a little company self-care, I asked my BroBible colleagues about their skincare routines.

I was shocked about what I learned.

Reminder: Get 15% off your order with code BROBIBLE at Cardon 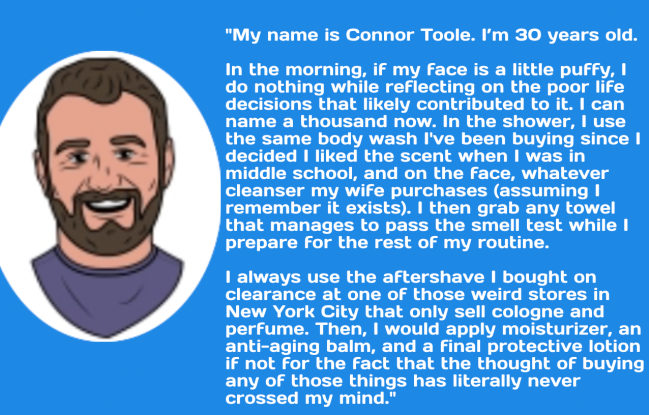 Connor’s approach, while shameful and unsanitary, is not uncommon. Middle school habits die hard, but the Smell Test should not govern any man who doesn’t put Surge in his cereal. 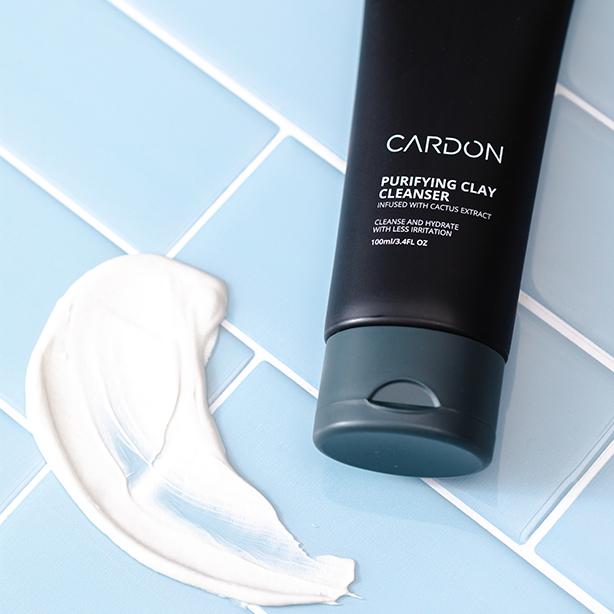 The Purifying Clay Cleanser ($18) has four times the absorption power of charcoal and ionizes when mixed with water to hydrate the skin, while also balancing oil levels, that can help offset the visual manifestation of Connor’s “poor life decisions” in his face.

Ask Men dubbed it the Best Face Cleanser for Combination Skin, so don’t just take my word for it.

As a Tennessee native and BroBible’s resident Golf Guy, Mark’s relationship with the sun runs deeper than a professional golfer’s tee shot. The fact that he puts as much effort into skincare as he does a game of putt putt with a toddler is deeply troubling. 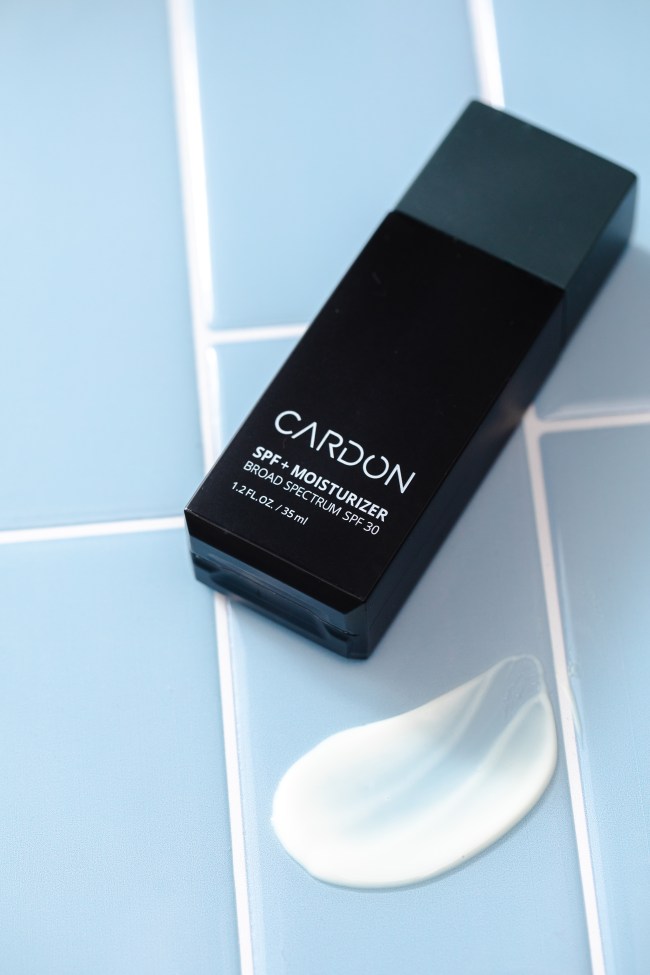 Named Best Sunscreen by a bunch of fancy-schmancy publishers like GQ, Forbes, Ask Men, Valet & more. We think it’s the bees-knees too. The water-based formula is the only sunscreen I’ve tried that not only leaves zero white residue but doesn’t feel like a Ms. Lippy arts and crafts creation.

“Pride goeth before the fall.”

It’s concerning that the CEO of our company would utter something so ludicrous, but he does have two toddlers at home, so his delusions may be insomnia-induced.

While I cannot help with the sleepless nights that plague new parenthood, I can suggest a remedy to eliminate those ghastly dark circles that surround the eyes like a Scarlett Letter of Sleeplessness. 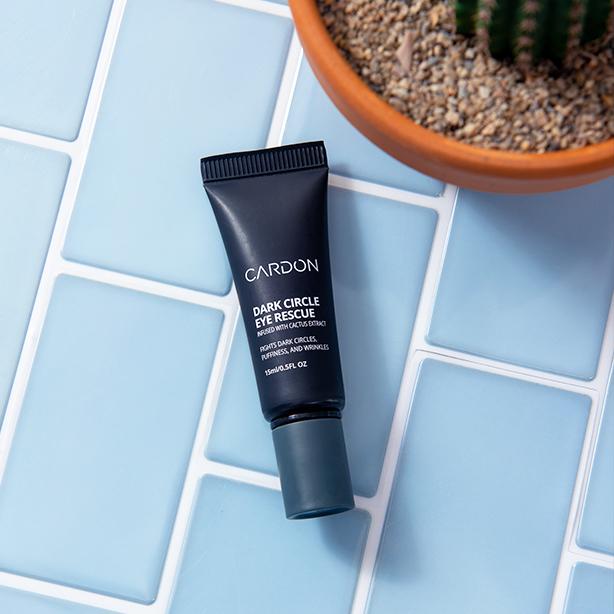 A best-seller that has ran out of stock three times already. Made with 2% Haloxyl (3 active peptides) to reduce the appearance of dark circles and puffiness, and hyaluronic acid and Niacinamide to provide deep hydration and firm the skin.

Cardon Fact: Facial skin is much more delicate than the body, so using body wash to clean your face will damage and over-dry it.

Doug’s pithy response leads me to believe that he suffers from Resting Pout Face. Pouting can weaken the elasticity in one’s face sooner than it should, and I wouldn’t want that for my dear old colleague. 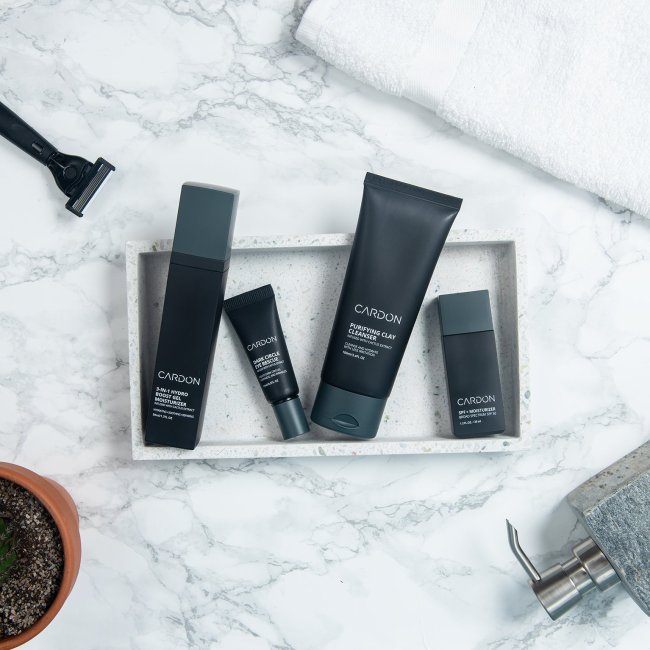 LIMITED TIME OFFER: Get 30% off your first set subscription with code FIRSTSET

I’m guessing the sight of four whole products would send Doug into a self-care panic attack, but the Anti-Aging Set is Cardon’s most popular product and the set I use (and swear by) and I can hardly commit to putting on real pants in the morning.

I am an infant in the skincare game, but I will say that since I began incorporating Cardon products into my morning/nightly routine, I’ve noticed a genuine difference in the evenness of my complexion, the natural glow of my skin, and a general lightness of my dome-area.