Microsoft Unveils 10-Inch Surface Go, Their Lightest And Most Affordable Tablet Yet

#Affiliate Partner
BroBible may earn a commission if you buy a product or service via links in this article.
by Paul SaccaJuly 10, 2018 11:55 am 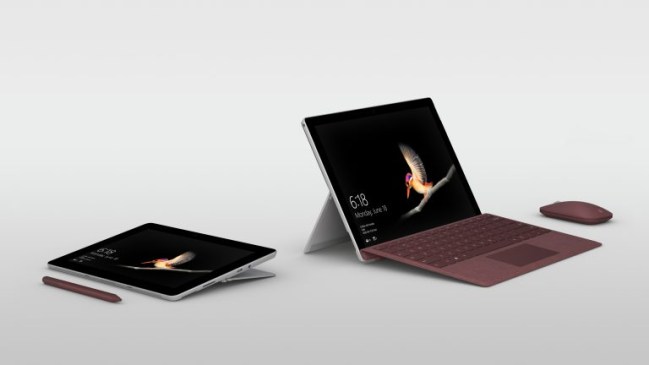 Microsoft unveiled the latest addition to the Surface lineup on Monday and it is the smallest, lightest, and most affordable tablet yet. Introducing the Microsoft Surface Go. Microsoft is releasing the brand new tablet with a 10-inch screen, but it will still have many of the same features that you expect from a Surface device.

The Surface Go has the same design you’re accustomed to with the variable position kickstand, but it is super light, thin, and portable weighing in at only 1.15 lbs. The unit also features 8MP rear/5MP front cameras with Windows Hello facial recognition and Microsoft’s proprietary Surface Connect magnetic charging and dock port for a desktop dock. The 10-finger multi-touch screen with Surface Pen support has a 3:2 aspect ratio display and 1800 x 1200 pixel resolution. Microsoft upgraded to the USB-C 3.1 port, which charges the Surface Go but also is capable of being a video/data output to other devices. The tablet has a microSDXC card reader, 3.5mm headset jack, and Windows 10 Home.

The Surface Go base model is $399, but that means you’ll get less performance than a Surface Pro that starts at $799. The new tablet comes with 4GB of RAM, 64GB using an eMMC interface, a less powerful Intel Pentium Gold 4415Y processor, a four-thread Kaby Lake chip that initially launched 18 months ago, and an estimated 9 hours of battery life which is less than other Surface models that are also larger.

To add a keyboard case to the Surface Go will cost an additional $99 or $129 for the fabric-covered Signature Type Cover. The Surface mobile mouse is priced at $34.99 and the pen is $99.99. The Microsoft Surface Go is set to release on August 2 and you can preorder the device HERE.