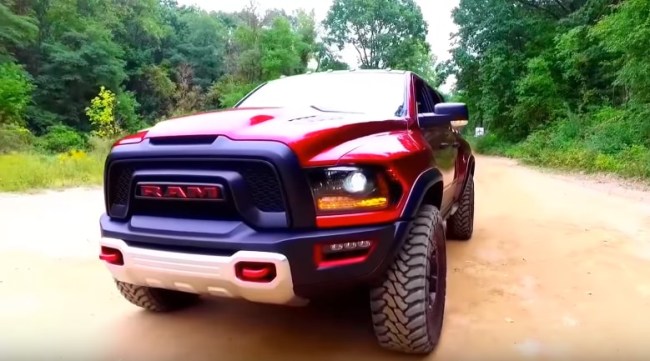 Many are excited about the 2019 Ford Ranger Raptor, but it has yet to be officially announced for the United States. But in the super performance pickup truck genre, it might be the Ram Rebel TRX that captures the hearts, minds, and dollars of truck enthusiasts.

There is a new report from 5thGenRams that states Fiat Chrysler will take their enormously powerful Hellcat engine featured in the Charger and Challenger and install the massive powerhouse into the Ram 1500 pickup. The only negative from this report is that we wouldn’t get this spectacular Hellcat-powered pickup truck until 2021.

The Ram Rebel TRX concept would reportedly have the Hellcat 6.2-liter supercharged V8 engine that pumps out 707 horsepower and 650 lb-ft of torque. That would be the most powerful engine in a mass-produced pickup truck. The report also says that there would be a less powerful version and be called the Ram Rebel TR. Dodge unveiled the original Ram Rebel TRX concept a few years ago and it was to have 575 horsepower. That concept pickup truck never advanced past a concept vehicle.

For comparison, the Toyota Tundra boasts a 5.7-liter V8 that has 381 horsepower and 401 pound-feet of torque and the 2018 Chevy Colorado ZR2 has 308 horsepower. If you want more horsepower right now, you can get the custom-built 600-horsepower Hennessey VelociRaptor or the 800-horsepower Yenko/SC Chevy Silverado. If horsepower isn’t your end-all, be-all in a sweet pickup truck, you might love the redesigned 2019 Ram 1500 with a 12-inch infotainment screen.