#Yeti
BroBible may earn a commission if you buy a product or service via links in this article.
by Brandon WenerdOctober 15, 2019 2:44 am 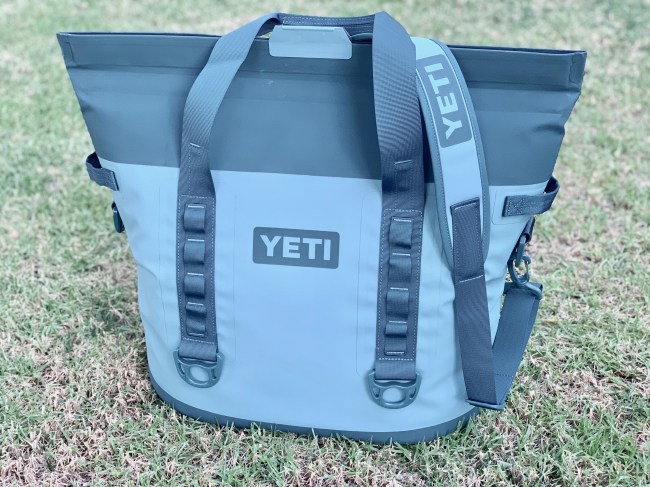 There are plenty of reasons to prefer a YETI soft cooler to a YETI hard cooler. Ever get clumsy with YETI hard cooler that’s packed full and have it fall on your toes because you decided to wear flip flops to the beach?

Hint: It hurts like heck. Ever try to sling a YETI hard cooler over your shoulder to wander to your buddy’s tailgate in another parking lot? Ain’t gonna happen.

You get the point.

A few years ago, YETI completely reimagined the bush league soft cooler category with the innovation of the YETI Hopper line. Suddenly, soft coolers were a cool thing to own again. YETI Hopper coolers are a game-changer for anyone who needed a second cooler to compliment their YETI Tundra (… consistently one of the best coolers out there) in situations that required more mobility. IE: The cooler you could stick your lunch and beer into for a day on the water, as opposed to the cooler you want to ice down your catch on.

With the YETI Hopper, YETI applied it’s insulation magic to a cooler you could conveniently and comfortably walk somewhere with, as opposed to simply pull it out of the back of your truck. Bottomline is this: Before the YETI Hopper, it was impossible to imagine a soft cooler that could keep ice for longer than a handful of hours on summer day, let alone 12 hours.

The original YETI Hopper had zip seals for access to the cooler. It was an awkward experience to open at best, with zippers constantly getting stuck with frequent opening and closing.

The YETI Hopper M30, however, is focused on the magic of magnets for an opening. In fact, the magnetic seal is such an important feature to the YETI Hopper M30 that the Austin-based gear company put “M” for magnets in the product name, right before 30.

For a YETI Hopper M30 review, I recently lugged one around Southern California for all my day hikes, beach trips, picnics, and tailgates. 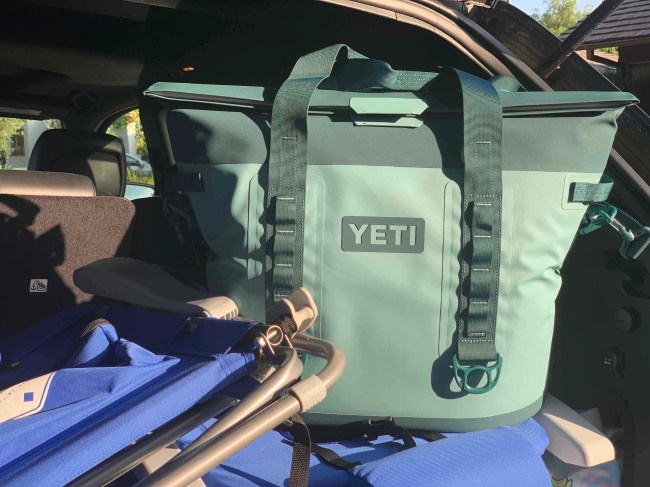 Here’s what I loved about the YETI Hopper M30

The YETI Hopper M30 holds what you need for a day with a couple friends. It hold about 7.2 gallons – 20 cans of beverages with ice or about 28 pounds of ice itself.

More important for my YETI Hopper M30 review: It keeps said contents icy cold, all day long. In 80-degree temperatures, without being exposed to direct sunlight, ice stays in the cooler for over 24 hours. This is where YETI’s cutting edge R&D for the M30 shows noticeable dividends: YETI claims the Hopper M30 has about 20% more ice retention compared to previous YETI Hopper models.

This is the product design magic of what YETI is calling HydroShield™ Technology. In their words, HydroShield™ Technology creates a “ultra leak-resistant, yet easy-to-use closure.” They key factor here is the strong yet soft magnetic strip locking together automatically along with a fold-over system, enhancing the cooler’s overall thermal capability.

Think about the YETI Hopper M30 like a really complex, state-of-the-art bag of shredded cheese.

In a way, the M30 seals in the same manner as you zipping the bag of shredded cheese at the zip, then creating another seal on the bag with the top that you left torn-open.

Two “Quick-Release Buckles” strap over the top so you can gently toss it in a boat or the trunk of your Jeep without worry about it leaking when it topples over it. In fact, while testing for my YETI Hopper M30 review, I did just that plenty of times, including when it fell out of my Grand Cherokee upon opening the trunk.

A few key features and specs of the YETI Hopper M30:

People get so caught up in the “how long does the ice stay?!” part of owning a YETI cooler that they forget about the simple things, like ergonomics and comfort.

The point of a great soft cooler is the ability to lug it around with you. Waiting in line at a craft brewery for a beer release and want to ice them down immediately? You sure as hell don’t want to stand there with a cumbersome hard cooler. But a YETI Hopper M30? Why not! Slinging something over your shoulder is a convenience game-changer.

It rocks to be able to move around with a packed cooler. Since it’s not going to leak and doesn’t take up much room in your car, you’ll find excuses to pack it full, whether it’s adult beverages or charcuterie and carrot sticks for a picnic. 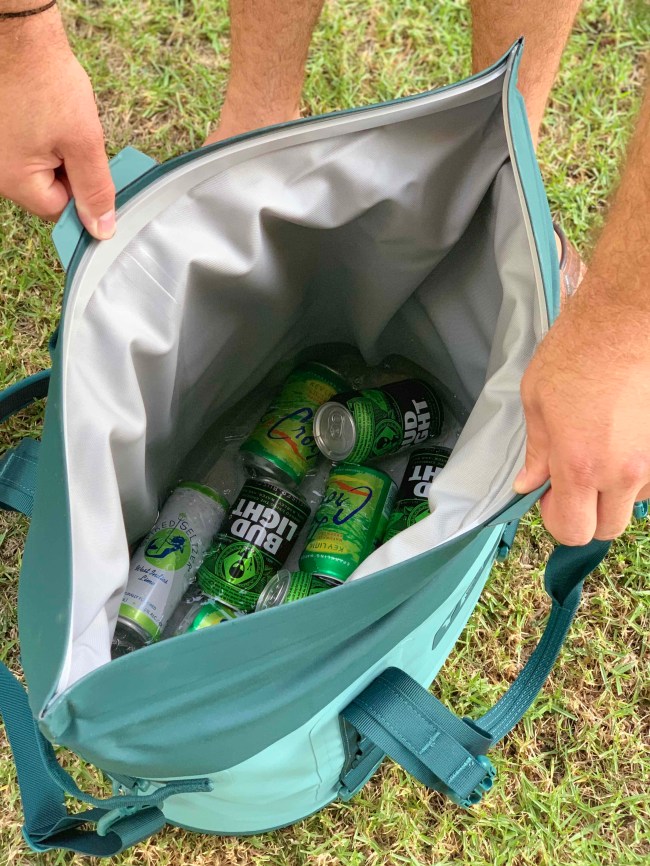 My biggest Issue with the YETI Hopper M30

There are two. First of all, the magnetic strip seals rapidly, making it hard to (A. open the cooler and fill it with ice and (B. opening to grab beverages out of your cooler while you’re holding it open. It’s a cooler that occasionally requires teamwork – Many people have noted that it takes “three hands” – which is kinda true. This design – as revolutionary as it is for soft coolers – has become a common UX complaint about the YETI Hopper M30.

To be honestly I have no problem keeping it open by myself with an elbow and forearm (not pictured above), just involves some creativity. Clearly it’s a non-issue for this angler as well:

Easier packing, drink fetching, and unpacking. The ultra-strong magnetic seal on the All-New Hopper M30 Soft Cooler is a breeze to open, and closes almost on its own. #BuiltForTheWild

Plus, in my experience, the extra effort to get into the bag is worth it for a quality seal to keep your items colder for longer. Clearly that was the goal of re-engineering the YETI Hopper in the first place.

That said, there’s another issue with keeping the YETI Hopper M30 open on it’s own: Drainage. Since the magnetic seal is so hard to keep open, it’s tough to fully dump out water in full. I’m a freak about keep my coolers clean and dry after use, all for fear of mold. Having thrown away plenty of coolers over the years because of mold, this is a big one for me.

All soft coolers are tough to dry out, but the YETI Hopper M30 is an extra tough one to dry. I use a 10-inch dowel rod to prop it open on my patio so I can let my YETI Hopper dry out in the sun. Provides just enough opening to get the job done in good sunlight.

It’s not ideal, yet again: It’s the price you pay for an intense, quality seal to keep your items cold 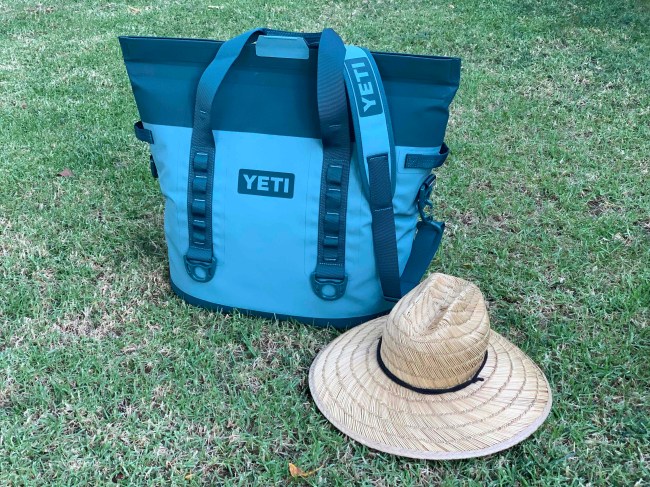 Bottomline on the YETI Hopper M30

Bottom line – this cooler is a big step forward for anyone who needs a highly function cooler for their active, on-the-go lifestyle. It’s easily one of the best soft coolers on the market. Essentially, it’s the world’s best insulated bag. You can check it as luggage at the airport and it looks no different from any other great weekend bag.

The YETI Hopper M30 is worth the premium price tag if you need a sling-able, lightweight cooler that can take a beating and still to the job at hand of keeping your items frosty or toasty.

If you’re looking for a cooler that you can simply prop against your garage and have easy access to, then no – the YETI Hoper M30 is not for you. Stick with a Tundra.

Personally, I want something that can move at my speed and the magnets make that possible. 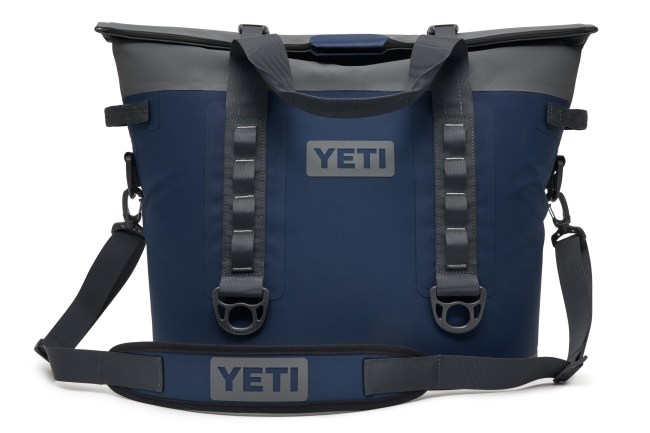 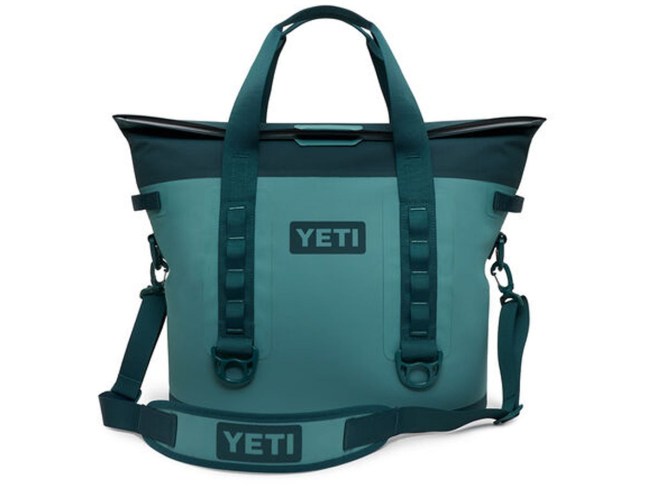