The U.S. Army Now Has Attack Helicopters With Frickin’ Laser Cannons On Them! (VIDEO) 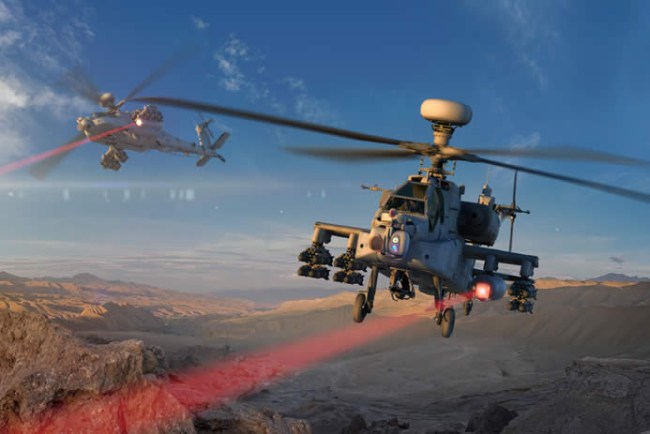 Flying cars, self-drying clothes, cloud cities, and laser weapons were all things we should have had by the year 2017, but we don’t. BUT THERE IS SOME HOPE! At least when it comes to laser weapons. That is because the U.S. Army took frickin’ laser beams and attached them to a motherfucking attack helicopter!

In a joint militry experiment, the U.S. Army and the U.S. Special Operations Command successfully tested an AH-64 Apache attack helicopter that was armed with Multi-Spectral Targeting System combined with electro-optical and infrared sensors plus a laser cannon made by military technology giant Raytheon. In other words, they attempted to blow some shit up and they succeeded at blowing some shit up. The copter conducted several different tests which ranged in targets, airspeeds, and altitudes at the White Sands Missile Range test ground in New Mexico. At the end of the day the metal-melting laser obliterated all of its targets from 7/8th of a mile away. This marks the first time that a laser weapons system successfully eliminated a target from a rotary-wing aircraft.

Raytheon has been working with the Army’s Apache Program Management Office on the Apache integration since at least May 2016. Speaking at an industry conference then, SOCOM Rotary Wing program chief Col. John Vannoy characterized the directed energy weapons initiative as a relatively inexpensive alternative to guided missiles and other munitions, a program that fits with Air Force Special Operations Command’s plans to outfit an AC-130J Ghostrider with an integrated laser system.

“We’re not at the point where we’ve laid out a business case to advance it,” Col. Vannoy said of aircraft-integrated laser systems. “We really want to understand the environment on the wing, the beam quality we can get off the wing and the ability to beam steer and keep power on a target.” Why the Army and SOCOM went with the Apache for such testing is unclear, especially given that, as Popular Mechanics points out, the command doesn’t typically utilize Apaches.

The benefit of lasers compared to contemporary weapons is that they are far more cost-effective, you never run out of ammo, and are extremely accurate. Now we should be getting plasma energy blasters any day now right?