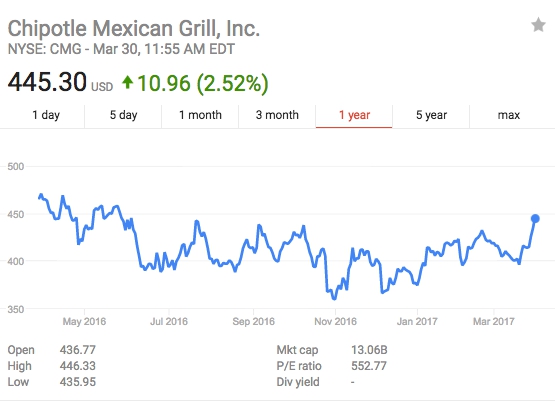 But is it really enough to save Chipotle’s soul and turn it back into the restaurant unicorn it once was? Some anylasts are doubtful, citing that there are plenty of people who are just done with the chain following the e coli scare. Note this analysts view, via The Street:

While Wedbush analyst Nick Setyan views Chipotle going “clean” with its food as a way to “get them back on the right path,” he told TheStreet that challenges still lie ahead for the company.

“Obviously there are headline risks,” Setyan said. “There’s probably some five to 10 percentage of customers that will never return.”

While Setyan, which has a neutral rating on Chipotle stock, expects the burrito chain’s same-store sales to improve slightly – in the low- to mid-single digits – in the first quarter, profit margins will remain pressured throughout the year due to the resulting company turnover from the E. Coli scandal.

Others on Wall Street don’t like the added cost it takes to run these new programs associated with the restaurant chain. via The Street:

“We expect a slower than targeted same-store sales recovery along with higher costs associated with new food safety programs to keep margins below historical levels of 20% plus,” wrote Jefferies analyst Andy Barish in a February note. “We believe current valuation is not capturing the fundamental operating changes and potential risks.”

Barish has an underperform rating and $300 price target on Chipotle, implying a 31% decline.

This subject actually came up on Foodbeast’s podcast the other week. Throw it a listen: