Animals Are Jerks: Goat Breaks Into Colorado Office By Smashing In Glass Doors With His Horns 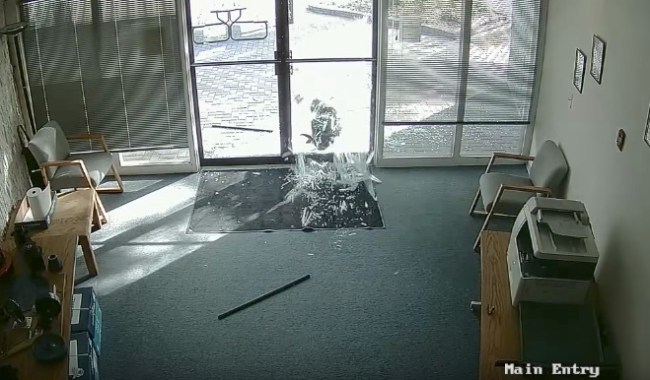 When employees showed up to the Argonics, Inc. office in Colorado for work on Monday morning they suspected they’d been the victims of a burglary. A break-in had taken place but there was no burglary. Once they went to the security camera footage they discovered that the two shattered glass doors were the result of an asshole goat. You can see the goat walking straight up to the glass doors at Argonics, Inc. and smashing them with his horns until the doors completely shatter.

My hunch is that glass doors had a mirror reflection on the outside and the goat smashed those doors because it thought it was looking at a rival goat, and while the goat was bashing the door with its horns it thought it was actually engaging in a ritual of dominance. The goat was clearly startled with the first glass door came crashing down and hauled ass out of there, but you can see his fellow goat friends lingering in the background. After the glass settled, this combative goat caught his reflection once again in the other standing door and proceeded to smash that one until the glass shattered.

I find myself thinking about what would’ve happened if this company didn’t have a security camera filming that door. And they reported this incident as a burglary but not a single thing was missing or out of place. So they’d spend days, weeks, months, and years wondering what in the fuck those thieves came to steal that day. An all consuming thought that eventually caused the CEO to lose sleep and hit Vegas for a bender to blow off steam, a bender that ultimately resulted in the company going bankrupt all because he threw the Q4 earnings on Black at the Roulette table. Thank god for that security camera, crisis averted. (video via r/videos)