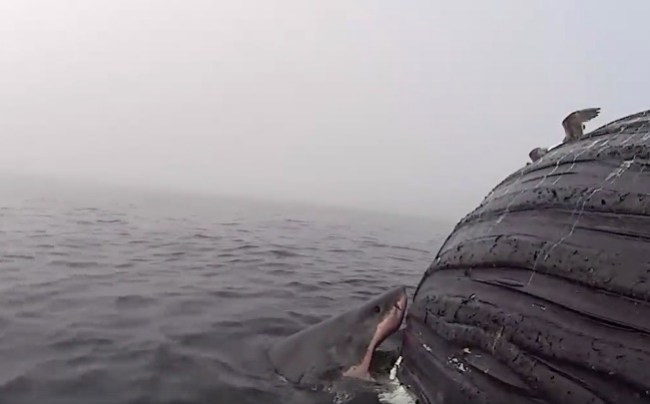 This seems to happen a handful of times each year in Southern California. A large whale dies while migrating through the area and its bloated carcass hangs on the surface. Slowly, that enormous dead whale begins to float towards the SoCal beaches somewhere between L.A. and San Diego, in this case, Dana Point. The smell of that whale in the water then brings in the gigantic great white sharks which also inhabit the area, giving them a chance to feast on these rotting whales.

This phenomenon isn’t unique to the Southern California region either. We’ve seen great white sharks circling boats and gorging themselves on dead whales just a stone’s throw outside of New York City. There was this incident which drew in 70+ tiger sharks to make mince meat of a dead whale.

My favorite is this incident from last Summer when a great white shark actually attacked a boat filming other sharks feasting on a dead whale, also in Southern California.

Sharks are awesome, aren’t they?