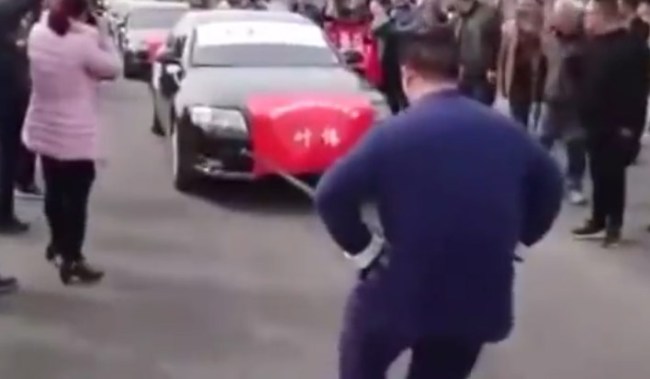 If you can watch this guy, I don’t care if you are male or female, pull seven cars weighing almost 14 tons with his nuts without cringing you might actually be dead. Seriously, check your pulse.

Because I just wanted to curl up into the fetal position after watching him accomplish this “feat of strength” with his balls.

According to Metro, this dude’s name is Ye Wei and he’s some sort of martial arts expert. Not sure which part of the martial arts requires you to pull shit with your scrotum, but okay.

Ye has been practising his own brand of martial arts that focuses on ‘inner strength’, energy from his spine, as well as his testicles, which he charmingly calls his ‘outer kidneys’.

Uh, bro, I don’t want to tie a rope to my kidneys and pull seven cars with them, much less my nuts. What is wrong with you?

After his “feat” Ye claims to have set a new world record by yanking the vehicles eight meters with his nuts, but it’s not clear for what organization.

(By the way, the video says 12.6 tons, but that’s metric. It’s almost 14 tons in our totally not antiquated American way of measuring, dammit.)