In a business made for unclogging pipes, the problem for this massage parlor turned out to be clogged pipes. A sewer pipe clogged with condoms tipped off police in Austin, Texas about a massage parlor that doubled as a brothel.

Used condoms encumbered a waste disposal unit connecting Jade Massage Parlor and the shopping center to the city sewer system. A new realty had just taken over the strip mall when it made the jizzy discovery. They then notified the police. How many condoms are you going through that it obstructs a 4-inch pipe?

Police investigated the Jade Massage Parlor and found that they had a prostitution ring operating there. In the end, it wasn’t the patrons that were backed up, it was the massage parlor’s sewers.

The massage parlor advertised their illicit services on Backpage.com and even posted photos of women as well as parlor owner Juan Wang’s phone number. Juan Wang operated the massage parlor with her co-owner husband Joseph Emery. There were so many condoms clogging the pipes that I guess you could say that there was more that “juan” wang involved.

The married couple were arrested and charged with organized criminal activity and money laundering. For Wang, this was not the happy ending she was accustomed to.

Two days before cops were alerted about the condom clog, Wang was stopped at Austin-Bergstrom International Airport headed to China with $30,000 in cash, according to CBS Austin.

Wang nervously told police the money was for a medical procedure back in her home country and that it originated from Jade. She said her income there was $20,000 per year.

Wang was allowed to board the plane after providing authorities with a contact number.

On the bright side, at least everyone was practicing safe sex.

This is what the sewers will look like in Austin nine months from now. 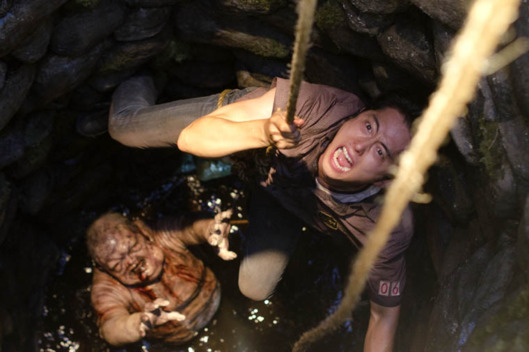 That plumber had better wear a hazmat suit when he attempts to snake the drain.

The moral of the story is throw your used condoms in the trash.