People Shared The Most Brutal Ways They’ve Been Rejected And Damn, Some Chicks Are Cold 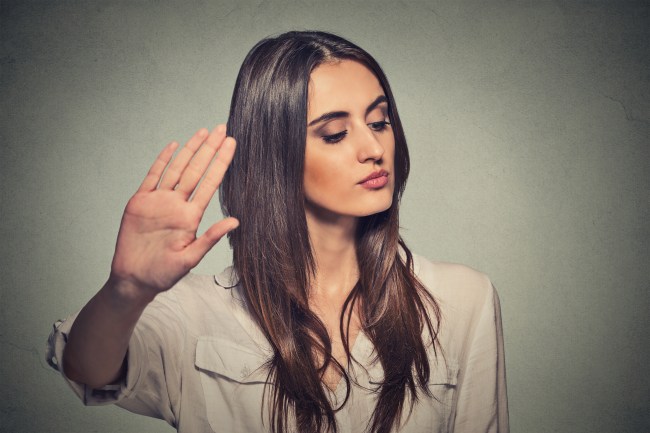 Rejection is nothing more than a necessary step in the pursuit of happiness, they say. At least that’s what I tell myself in the shower every morning when I think about Jessica Davidson calling me ugly at recess two decades ago. Rejection, in any endeavor, sucks. Learning that you aren’t handsome or smart or funny enough can send you on a 10 year bender that results in you storming into your ex-girlfriend’s wedding and calling her new husband, Chad, a pussy.

But enough about my demons. Reddit user makewafflesplz posed the question: What’s the most brutal way you’ve ever been rejected by someone? It’s garnered over 2,400 responses. Here are the best.

Standing in the rain at night, after two years of dating, I think she is about to tell me that she loves me. Nope. She tells me that she is in love with my brother and has been dating me to get closer to him. I told my brother and he said “Hell no! Fuck that crazy bitch!”

Congratulations for having the strength to continue living, bruh.

I was at a party in high school and I made a move on my crush at the time. She turned me down quickly, and that was that…until the next school day. She apparently went around telling everyone that we hooked up, but I had a tiny penis and I had trouble getting it up.

She not only refused my request, but assured no one at the high school would ever think about getting with me.

Some women just want to watch the world burn.

I had someone come up to me and say they liked me. I smiled, then they said “hahahaha just kidding. You’re a loser.”

That shit stings for months, man.

Just months? I had a girl tell me I look slow in eighth grade and it still pops in my head in the shower from time to time.

I am brown (indian) and was 16 at that time. I use to go to an all white high school. My friend at the time pressured me into asking my crush to our semi formal dance. Took me a couple of days but when I finally had the courage to go up to him and ask he replied with, “sorry I don’t go out with savages.”

FYI* Savages is what “canadian” white settlers use to call Aboriginals.

Me and my best guy friend at the time were planning on going to the movies to see Deadpool last year. We lived on different sides of campus, so we planned on meeting at the theater. I thought this was going to be like a date, so we split a popcorn and grabbed seats. We chatted a bit, and once the previews started, he leaned in towards me and I definitely thought he was going in for a kiss. I went for it, only to be met by his hand on my mouth pushing me away and a weirded out look on his face. Turns out he was trying to ask me to move down a seat because he had decided to invite his new gf (who I had never met/knew about) and he wanted to sit by her. Not only was I mortified, but he kept the popcorn for himself and this chick. First and last time I initiate plans.

What kind of lunatic invites his girl friend out with his girlfriend.

Got dumped by the girl I was going to propose to in a foreign city, halfway through a two week vacation. She just disappeared on me. Knew something was up when her luggage disappeared from our hotel room, she ignored every text I sent her, didn’t hear from her for six months when she finally sent me a message: “How are you doing?”

I guess she got concerned, or as concerned as a heartless reptile can be, when I stopped updating Facebook, Instagram, and changed all my statuses. She never got a response from me, and went on permanent block. She then tried to blow up my Facebook, until I unfriended her. I may have talked to her had she provided an explanation, but she never did. Fuck her.

Met up with a girl from Match and we sat down at a restaurant and grabbed the first round of drinks. So far, so good. Decent conversation ten minutes in. She then asks if she can excuse herself a second while she goes to the bathroom. No problem. She walks away and two minutes later, the waitress comes over with the check. I gave her a confused look. Waitress says that she thought we were leaving because my date just walked out the front door and got in her car. Sure enough, ten minutes in was all this woman needed to decide to just back out, not even have the human decency to finish her drink and just run away.

Never even bothered to text her to ask what was up. Finished her drink and then headed back home.

How much of the drink she have left? I’m trying to find a silver lining here.

Keep your heads up bros. Stay strong. Fake a smile. Move on.