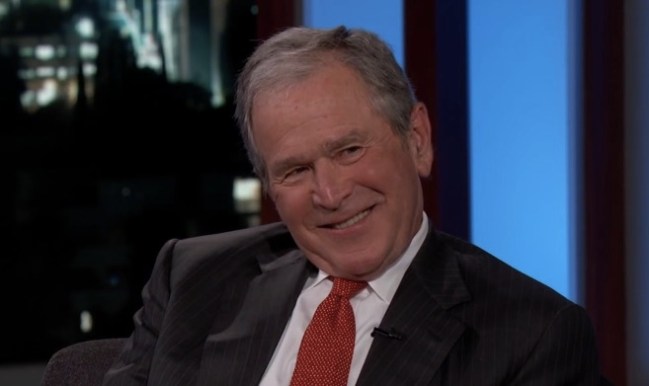 Former President George W. Bush, aka ‘Dubya’, has been making the TV rounds to promote his new book of oil paintings in which he memorializes the military men and women who served him while he was in office. Last night, he appeared on Jimmy Kimmel Live and there are two segments worth watching.

In the first segment, George W. Bush talks about meeting with Lorne Michaels and arguing over the word ‘Strategory’ when Lorne tried to take credit for that term. He also discusses how he felt about Will Ferrell’s impressions of him, and who the former President of the United States thinks did the best Dubya impression. In the second segment (below), George W. Bush talks about the jokes they used to crack in the White House after former VP Dick Cheney shot someone during a hunting trip.

It’s great to see that President George W. Bush has a strong sense of humor and humility. If you’re not able to laugh at yourself then how can you ever be expected to recognize your own faults?

I hadn’t thought about the Cheney shooting incident in quite some time, but it’s pretty fun to see former President George W. Bush having some fun with one of the most bizarre incidents in White House history.