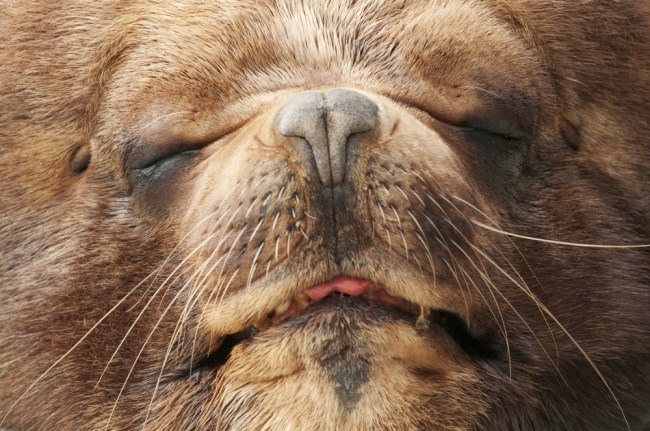 Sea lions have a reputation for being voracious hunters. Contrary to their appearances, they’re not just cuddly puppies of the sea.

They are capable of taking down fairly large prey and doing so without breaking a sweat. They’re not out there swimming around to make friends, sea lions leave dry land in search of their next meal and they’re willing to brutally murder anything that gets in their way.

Case in point, this sea lion photographed this week off of Newport Beach, California eating a horn shark estimated to be 4-foot-long from end to end:

These photographs were taken by Capt. Ryan Lawler of Newport Coastal Adventure, a whale watching tour owner/operator out of Newport Beach, California. Capt. Lawler spoke with Pete Thomas of GrindTV about what he encountered:

“Getting closer we saw a sea lion violently thrashing around some freshly caught prey. This is not too uncommon but we are always interested in what exactly it might be, as the sea lion’s diet varies widely.

“After I got a picture of predator and prey I realized it was a horn shark that was being eaten. While I have seen sea lions eat thresher sharks, angel sharks, and a variety of skates and rays this was the first horn shark, and a bit of a surprise because of the deeper water we were in (180 feet).

And you know what’s really fucked up? This isn’t even the first time in the past 30 days that this happened. Another sea lion was photographed devouring an even larger shark just a few weeks ago:

Nature is unforgiving. It’s a kill or be killed world out there when you’re just another creature swimming in the ocean.

For more pictures of this gnarly sea lion eating a shark, you can CLICK HERE to head on over to Grind TV.