Shark Attacks Man Swimming At Nude Beach, Bites Him On Both Legs But Misses His Manhood 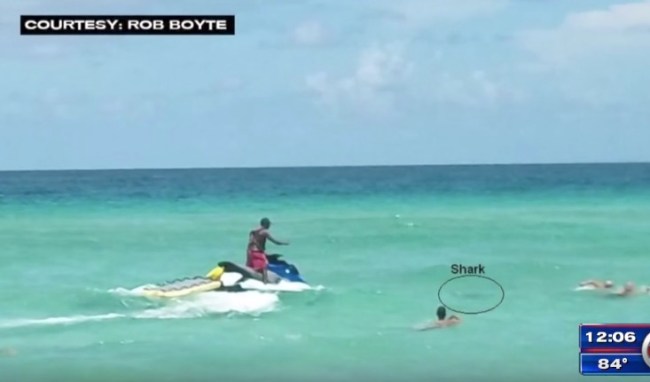 Only 15 times in recorded history has a swimmer been attacked by a shark in Miami-Dade County waters, and never until last weekend has a swimmer at a nude beach been attacked. On Sunday, 44-year-old Elvin Lanza was taken to the hospital after being bitten on both legs by a shark, an incident that left some nasty wounds. Elvin is expected to make a full recovery but this is certainly a noteworthy shark attack given that 1) it happened at a nude beach, 2) how rare shark attacks are in Miami, and 3) the incident was caught on camera:

I can’t even imagine how terrifying it would be to suffer a shark attack and feel stranded out there in the water. Board shorts and swim trunks are just tiny layers of fabric that a shark’s teeth can cut through like butter, but they at least give us the peace of mind that there’s a barrier between us and the ocean. There’s just something about the thought of floating naked in the ocean and getting bitten on BOTH LEGS by a shark that is 10000x more terrifying than the thought of being bitten on both legs while wearing trunks or a swimsuit of some sort.

The shark was identified as a bull shark, a species which is responsible for a large majority of the annual shark attacks worldwide. There’s also speculation that the shark attack was triggered because a lifeguard provoked the shark by trailing it on a water bike, putting the shark on edge:

“The animal was being harassed — not necessarily intentionally — but trying to be herded out of the area,” said George Burgess, director of Florida Natural Museum of History’s International Shark Attack File. “An animal being cornered will lash out. It’s a potential contributing factor that should be addressed.” (via Miami Herald)

I think it should go without saying that provoking sharks is a stupid fucking idea, but apparently it’s a statement that needs to be shared because a friggin’ lifeguard didn’t even know better. If you don’t provoke a shark there’s a pretty damn good chance that you won’t be attacked. Sharks aren’t out there swimming around looking to eat humans, it’s just not in their nature.

The incident went down at Miami’s Haulover Beach, a popular nude beach. And you can read a full report of the incident, including how the naked swimmer was saved, over on the Miami Herald.