If You Think The Coca Cola Tastes Better At McDonald’s You’re Not Wrong, And Here’s The Reason Why 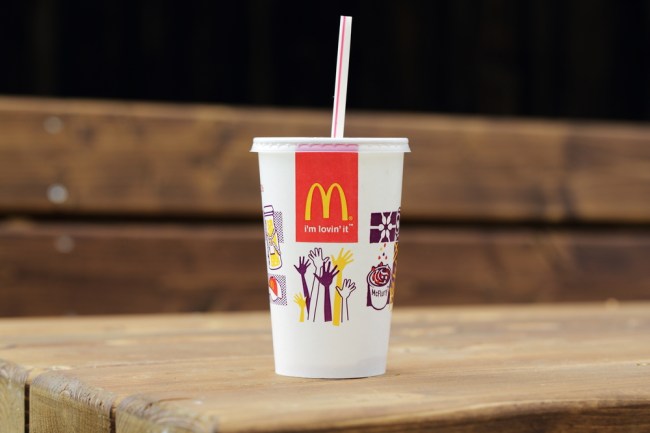 Growing up, Coca-Cola was my jam. I used to drink regular Coke like it was going out of style, chugging them from the can, 2-liter bottle, and out of the fountain machine at McDonald’s. Often times my dad and I used to hit up McDonald’s on Sunday mornings after Church and since my mom wasn’t around my pops would let me drink a soda with my breakfast, so it made that Coca-Cola taste even better.

I remember visiting Disney‘s Epcot for my first time in 4th grade and tasting my way through the ‘Coca-Cola Flavors Around The World’ exhibit and thinking that European Coke tasted like absolute garbage, that they shouldn’t even share the same name with the Coke I drank from McDonald’s…It turns out that I’m not alone in thinking Coca-Cola tastes best from McDonald’s, and the bros over at The Lad Bible tracked down the scientific reason behind this phenomenon:

Firstly, all McDonald’s restaurants use a water filtration system, and because 85 percent of the drink is water, good water means a better tasting drink.
According to Spoonuniversity.com, temperature also plays a huge part, so both the water and the syrup are kept chilled before it enters the drink dispenser. The dispenser itself is kept at a constant temperature just above freezing; which is essential for reaching peak c02 levels, meaning that your drink stays fizzy for longer.
On his blog, US writer Mark Proffitt also wrote about the process McDonald’s go through.
He wrote that McDonald’s shift so much of the stuff, they don’t need to use the plastic syrup bags a lot of places do, they can get their syrup delivered in stainless steel cylinders and because they sell so much it doesn’t sit around for long, meaning that it’s much fresher.
Lastly, the extra-wide straw you get in McDonald’s is, according to its website, designed that way “so all that Coke taste can hit all your taste buds.”

Let me get this straight…McDonald’s has an advanced temperature control system for their Coca-Cola that makes it taste better than every other Coke on the planet, but they can’t keep the mother fucking McFlurry machine working for more than a week straight? Seriously, how many times have you tried to order a McFlurry and that shit was broken?! Over 50%, probably. But the Coca-Cola has some rigorous process it goes through to ensure optimal taste and it’s somehow always working?! This doesn’t make any sense at all.

I haven’t drunk a Coke in a little over 4 years, not since I was hungover and read an excerpt from Salt Sugar Fat (BUY IT NOW on Amazon: $10.99) in the New York Times about how the world’s largest food conglomerates have manipulated everything we eat in order to amass the largest corporations the world has ever known. That article (and later the book) had me convinced I needed to take more control over the foods and liquids I put in my body. I’ve mentioned this before here on BroBible, but when I’m hungover I’m extremely susceptible to buying into shit like this, and for whatever reason the information from Salt Sugar Fat stuck with me after that day.

RELATED: McDonald’s Employees Revealed How To ALWAYS Get Fresh Fries, Ways To Save Money And More Cool Hacks

I’m not sure if I’m healthier after ditching soda for the past 4 years, but I can definitely tell you I feel better after cutting out a ton of processed food and taking more interest in cooking/grilling/using the smoker at home. I won’t tell you bros not to drink Coke because it’s bad for you. You’re all grown ass men and can make your own decisions. But I will tell you that back in H.S. when I was on the Crew team (rowing), we used to clean the corrosive saltwater gunk off the nuts and bolts from our boats using regular Coca-Cola. That was the first time in my life I realized that it probably wasn’t something I wanted to be putting in my stomach.

(Shout out to The Lad Bible for tracking this info down!)