16 Women Revealed Their Red Flags When It Comes To Dating Guys, So Get Ready To Take Notes 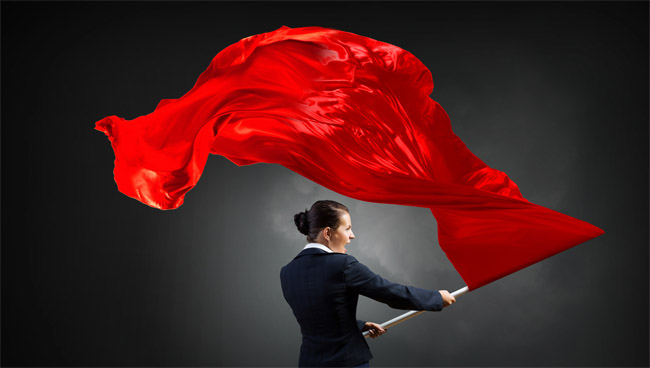 Dating is such a minefield of “do this but don’t do that” it’s nice to have some facts to help us maneuver through it. I mean, we, as men, will never truly understand the female mind, we get that, but how about a few pointers?

For instance, women shared some red flags when it comes to the men they date. This is news we can use. If we gather up enough of these insights into the female mind like red flags, turn-offs, annoying habits, best opening lines and the like, we might have a fighting chance someday. (Yeah, right. We still have no shot.)

Men who very regularly “jokingly” describe themselves as an asshole, dick, etc. or make frequent jokes about lack of ability to be committed or a good SO. I dated a guy like this, mistakingly taking these remarks as self deprecating jokes because of how they were phrased. Then, when they turn out to be a shitty person, it’s not their fault because they “warned you”. ~ yungtulip

One I haven’t seen mentioned is the inability to respect boundaries, even small ones. It doesn’t matter what it’s for, “no” does not mean “convince me”.

Recent example, guy kept saying how he loves to cuddle and “when can we cuddle”. I told him that was way too fast and that i wanted to put a pin in that until we knew each other better. He agreed but then he kept. bringing. it. up. Finally I stopped things because his pushiness and neediness was making me uncomfortable.

Another common example is someone trying to buy me a drink after I say I’m good. Makes me wonder a. why they want to get me drinking so badly, and b. If they don’t hear “no” here where else will they not hear it? ~ erin_rabbit

No matter what anyone says, he knows better even if the person is offering just an opinion. ~ PM_ME_TINY_DINOSAURS

Saying what I can and cannot do. Let’s be clear: that’s my choice. If you have an opinion about it, I will absolutely have a conversation about it and consider your thoughts (I’m not unreasonable). But there is a huge difference between expressing an opinion and attempting to control. ~ emdee39

Trying to impress me by shitting on other girls you’ve been with or your friends. Also not being honest about your intentions. I don’t see anything wrong with only wanting a smash and dash/ FWB relationship from someone – just don’t lie about it! Any don’t go fucking crazy/ be persistent if they turn you down. ~ [deleted]

When I give you a heads up that I won’t be able to text or talk for a while because I’m working on something time sensitive or complex, and you bombard me with messages and calls anyway. It wasn’t like I was doing this every day, but if every two to three weeks I tell you “I’m offline unless there’s a corpse I need to identify. I’ll text you when I’m back”, and I get 13 messages in under four hours? I’m not going to be happy, and if you do it repeatedly I’m out. ~ FunctionalAdult

Refusing to let you keep friends of the opposite sex, especially if it’s a lifelong friend that you had before you met them. ~ Gingersnapsicle

More of a universal red flag: Saying I love you too early. ~ Mr-Molester

If everyone is “stupid” except him in his mind, abort mission.

Also, never date anyone who can’t even summon up the decency to be polite to a server, cashier, or other customer service. That’ll be you once the honeymoon period is over. ~ Abaiyachi

Laughing off or ignoring your boundaries or just things you want.

Another one is believing that women are all one way. Plenty of good-natured men who don’t hate women do this. I guess its just a lack of interaction with women, but it can get to the point where they don’t really see you for yourself, or you gotta prove them wrong constantly, or they may have these expectations for you you don’t live up to. ~ crashfest

Trying to isolate you from friends or family. ~ Ezera333

If they’re too close with their mothers or still relying on their approval like they’re children. ~ hawaiianpizza24

You have to remind them constantly of plans you’ve made.

They cancel last minute on plans 9 times out of 10 and act like it’s no big deal, and then tell you you’re being ‘too sensitive’ when you begin to get frustrated. ~ yankebugs

If the phrase “I’m a nice guy” leaves their lips, I advise running in the opposite direction. In my experience, any man who has said this so baldy has been the opposite of nice. ~ Smeggywulff

When he starts talking about seizing the means of production. ~ liamkr

Check out the rest of the ladies’ dating red flags, and there are a BUNCH of them, over at Reddit.